Trump sanctions against Iran to be followed by warning at UN 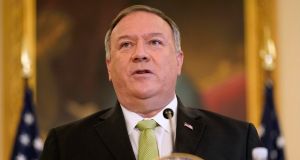 US secretary of state Mike Pompeo: Donald Trump recognises the Iran deal as an “abject failure” and “exercise in appeasement”. Photograph: Patrick Semansky

US president Donald Trump is expected to deliver a severe warning to Iran and China when he addresses the United Nations General Assembly on Tuesday, as the US defended its decision to impose sanctions on Tehran in defiance of the international community.

Mr Trump signed an executive order on Monday announcing sweeping sanctions on individuals, corporations and entities who contribute to the supply, sale or transfer of arms to Iran. More than two dozen people and entities involved in Iran’s nuclear programmes were included on the list.

New sanctions were also announced on Venezuela’s president, Nicolás Maduro, amid an increase in contacts between the two countries.

The move came less than two days after the United States unilaterally reimposed sanctions and restrictions on Iran through a so-called “snapback” process.

Other members of the UN Security Council insist that the US does not have the power to reimpose the sanctions and arms embargo on Iran because it has already left the Iran nuclear deal – the Joint Comprehensive Plan of Action (JCPOA) – signed by then president Barack Obama and other powers in 2015.

Announcing the new sanctions on Monday, secretary of state Mike Pompeo said the Trump administration had “always been honest about what the Iranian regime really is – a radical revolutionary and the world’s largest state sponsor of terror and anti-Semitism”.

Flanked by senior members of the cabinet, he said Mr Trump had recognised that the Iran deal was an “abject failure” and an “exercise in appeasement”.

He also said he expected US allies including Britain, France and Germany to comply with the order – a warning that is likely to deepen tensions between Washington and its western allies on Iran policy. Russia’s foreign minister, Sergei Lavrov, said he viewed any move by the US to punish countries partnering with Iran as illegal.

Mr Pompeo’s message was echoed by the US ambassador to the United Nations, Kelly Craft, who said she believed other UN members would “fulfill their legal obligations” and reimpose sanctions on Tehran.

“We don’t need a cheering section to validate our moral compass,” she said, referring to the UN. “We do not find comfort solely in numbers, particularly when the majority has found themselves in the uncomfortable position of underwriting terrorism, chaos and conflict.”

Relations between the US and Iran have deteriorated since the election of Mr Trump, who followed through on his election promise to exit the Iran nuclear deal. In January this year, the US killed Iranian commander Qassim Suleimani in a military strike in Iraq, and has warned that it could take further military action if necessary.

The coronavirus pandemic has forced this week’s meeting of the General Assembly to be a mostly virtual affair.

This year’s meeting – which takes place on the 75th anniversary of the United Nations – occurs a few months before Ireland assumes a seat on the security council. The issue of Iran is likely to feature heavily on the agenda of the 15-member body.