Maureen Dowd: Donald Trump is in position to reshape US supreme court long past his time in office 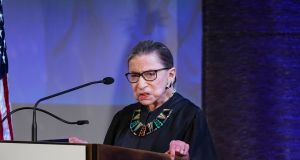 I used to feel pretty optimistic that the United States would get through the Trump years intact. In 2016, America got mad – and went mad. This administration has unleashed so many fresh hells that a portrait of the past four years looks very Hieronymus Bosch. But the idea of this country is so remarkable; surely it could withstand one cheesy con man who squeaked in.

Now we might have passed a point of no return. No matter who wins in November, can the harsh divisions abate? The stunning news on Friday night of the death of Ruth Bader Ginsburg guaranteed a political bonfire. President Donald Trump is in a position to reshape the supreme court long past his time in office with a third justice, giving conservatives a 6-3 majority.

With Democrats still smarting over Republicans’ refusal to consider Barack Obama’s pick of Merrick Garland for the court, this will push them over the edge, and maybe to the polls, especially women. And Trump’s base could race to vote, because the president has talked about nominating Tom Cotton or Ted Cruz, aiming to have a court that would overturn Roe v Wade.

Mitch McConnell said on Friday that Trump’s nominee – hopefully not Jeanine Pirro – will get a floor vote.

“We cannot have Election Day come and go with a 4-4 court,” Cruz told Sean Hannity. Imagine a Bush v Gore scenario with a 4-4 court. As it turned out, the founders created a country painfully vulnerable to whoever happens to be president. They assumed that future presidents would cherish what they had so painfully created and continue to knit together different kinds of people from different areas with different economic interests.

But now that we have a president who takes those knitting needles and stabs the country mercilessly with them, we can see how fragile this whole thing really is. All the stuff we took for granted – from presidential ethics to electoral integrity to a nonpolitical attorney general – is blown to smithereens.

The president who does not believe in science has been conducting a science experiment for four years: What happens to a country when you have a president who is doing everything in his power to cleave it?

It wasn’t long ago that Obama started on the road to the White House with a stirring speech about ignoring those who would slice our nation into red states and blue states because this is the United States of America. Now Trump blames the “badly run blue states” and “Democrat cities” for everything. He clearly doesn’t see himself as president of a majority of the country. Whenever he talks about the half of the country that didn’t vote for him, he paints a picture of a Scorsese urban hellscape the minute you cross state lines.

On Wednesday, the president offered the heinous hypothetical that the death toll from the coronavirus would not be as bad “if you take the blue states out”. As the president of Red America, Trump “regularly divides the country into the parts that support him and the parts that do not, rewarding the former and reproving the latter”, the New York Times’s Peter Baker wrote.

The line between politics and governing can be blurry, certainly. But with Trump, there is no line. Jared Kushner bragged to Bob Woodward that Trump can “trigger the other side by picking fights with them where he makes them take stupid positions”. Woodward writes that Kushner told an associate, “The Democrats are getting so crazy they’re basically defending Baltimore. ”

This gleeful assessment from Kushner, a Baltimore slumlord, is the height of cynicism. The anxiety about our fractious nature was reflected in the question of Susan Connors at Joe Biden’s CNN Town Hall Thursday night. “Mr Vice President,” she said, “I look out over my Biden sign in my front yard and I see a sea of Trump flags and yard signs. And my question is, what is your plan, to build a bridge, with voters from the opposing party, to lead us forward, toward a common future?”

Biden was soothing, reassuring that he could pick up those knitting needles once Trump was “out of the way, and his vitriolic attitude, and his way of just getting after people, revenge”.

But will it be so easy? The cultural ecosystem, and the fever swamps of social media that amplify Trump’s craziness, will remain. Fox News and Facebook will continue to validate the biases and conspiracy theories of a nation that’s increasingly proud of its ignorance, anti-intellectualism and denial of science.

Isn’t the simple fact that the race is this close, when Biden should be crushing Trump, given the president’s lethal negligence and wilful subterfuge on the virus and his racial demagogy, proof that our realities are so disparate from one another that unifying will be akin to cleaning a dozen Augean stables?

After Woodward’s book revealed that Trump knew early on how dangerous the virus was but downplayed it, I heard from those two alternate universes. “I can hardly breathe, it’s so incredible,” my friend Rita said angrily. “He was just trying to buck people up,” my sister, Peggy, said placidly.

In Duluth, Minnesota, at a campaign stop on Friday, a man in a MAGA hat jeered at Biden and told him he could never win. Biden approached the man from the alternate reality, elbow bumped him, chuckled and assured him that if he does win, Biden would work for him, too.

If McConnell has his way, that work wouldn’t include replacing RBG. – New York Times