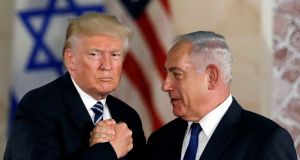 Israeli defence minister Naftali Bennett is pushing the government to vote next week to annex the Jordan Valley area of the occupied West Bank, as the United States gets set to publish its long-awaited Middle East peace plan on Tuesday.

Although details of the peace plan have still not been released, Israeli media are reporting it as “the most generous offer” ever made to Israel. It will reportedly allow Israel to extend sovereignty to all the Jewish settlements and to annex the strategically important Jordan Valley and northern Dead Sea, comprising about 30 per cent of the entire West Bank.

The annexation talk is “welcome”, said Mr Bennett, who is also leader of the right-wing Yamina party, “but it is, for the time being, just talk. The only real test is action.”

US president Donald Trump will meet with Israeli prime minister Binyamin Netanyahu in Washington early next week before unveiling details of the proposal, which he has dubbed the deal of the century.

Benny Gantz, head of the centrist Blue and White, and Mr Netanyahu’s main rival, was also invited to meet Mr Trump but is concerned such a move will only help Mr Netanyahu’s campaign to be re-elected.

The peace plan also reportedly leaves all of Jerusalem under full Israeli sovereignty and doesn’t require Israel to recognise a Palestinian state at this juncture.

The diplomatic bombshell comes only five weeks before Israelis go to the polls in the country’s third election in a year and is widely seen as a major boost for Mr Netanyahu, who enjoys a particularly close relationship with Mr Trump.

The development allows the Israeli leader to steal back the election agenda which so far has been dominated by his pending trial on charges of bribery, corruption and breach of trust. Israeli commentators noted that the day when the peace plan will be made public, next Tuesday, coincides with the day the Knesset parliament was to begin discussions on Mr Netanyahu’s request to be granted parliamentary immunity.

The publication of the US peace plan – drafted mainly by Mr Trump’s son-in-law, Jared Kushner – has been repeatedly delayed, mainly due to the ongoing political deadlock in Israel, which hasn’t had a government majority for more than a year.

The Palestinians have made it clear the Trump administration proposals are a non-starter as far as they are concerned. Relations between the Palestinians and Washington hit rock bottom when Mr Trump recognised Jerusalem as Israel’s capital at the end of 2017.

Palestinian president Mahmoud Abbas’s spokesman warned Israel and the US not to cross any “red lines”. A senior Palestinian official close to Mr Abbas said the purpose behind unveiling the American peace plan at this juncture was to save Mr Netanyahu politically and strengthen him ahead of the election.

Jordanian foreign minister Ayman Safadi warned that Israeli annexation of the Jordan Valley would spell the death of the two-state solution and terminate all opportunities to achieve peace with the Palestinians.