A new generation is seeing the repercussions of white supremacy, violence and capitalism 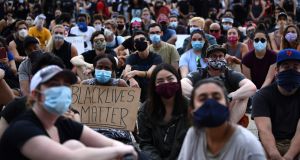 A demonstration at the Lincoln Memorial Reflecting Pool in Washington DC, protesting the death of George Floyd, who died in police custody in Minneapolis on June 4th. Photograph: Brendan Smialowski/AFP via Getty Images

I am writing under curfew in my sedate California town, the noise of helicopters overhead. There’s a global plague and a national uprising. This has been quite a week.

The preliminary event was when Amy Cooper, a white woman, called the police on Christian Cooper, a black birdwatcher in Central Park who politely asked her to leash her dog. She pointedly specified his colour as a threat. He filmed the whole thing, posted it and Black Twitter went to work. She could have gotten him killed, and she knew it.

To prove how dangerous her taunting was, the following day in Minneapolis, George Floyd was killed by the police in broad daylight. Derek Chauvin, a police officer, knelt on his neck for nine minutes as Floyd struggled for breath. The cop was fired but not arrested. All four officers involved now face charges.

Deadly racism has always been a constant here – the only difference is that people can now film it and share on social media. In response to nationwide spontaneous resistance, President Donald Trump invoked an obscure 1807 insurrection Act threatening to send the military to multiple states to crush protests. In a highly orchestrated show, armed police cleared a crowd of peaceful protesters outside the White House in order to clear the way for him to walk to a church. Then he held up the Bible for a photo op. It was evident he had turned the entire country into his own grotesque reality show. Yet the protests did not abate.

While he obviously exacerbates the situation, this is not happening because of Trump. We will not be able to vote racism away. This country is run by people with money, for people with money, to make more money. Both political parties and their media serve their interests, so we cannot elect someone to destroy their carefully constructed framework. The president is openly racist, but his likely opponent, Joe Biden, is notorious as the co-architect of legislation that created a privatised, predatory mass incarceration system which has disproportionately destroyed the lives of countless black and brown people in the last few decades. It conveniently disenfranchises them while profiting off of their labour.

The country is not broken, it was built this way. The United States began as a capitalist enterprise when the Virginia Company set up the first English colony on the land of the Paspahegh people, in 1610. Within four years, that tribe of native people had been wiped out. This correlates with a similar group of venture companies known as The Irish Society that was set up to colonise Ulster at the very same time.

Shortly after the English colonists at Jamestown wiped out the indigenous people, they brought over the first Africans, in 1619, to do their work and thus the connection between capitalism, colonialism and racism was firmly consolidated. The barbarous institution of slavery continued till 1865, and was followed by Jim Crow laws, segregation, the establishment of the KKK, lynching and racial massacres.

Racism is built into the United States through the education, health, housing and justice systems. There’s no making America great again. It never was. This land was always used by white Europeans to gather wealth. While people of colour were tolerated in order to support the system, they were mostly shut out of real power. History is ugly and relentless, with black people having to rise up, again and again, to push for basic rights and justice. To ask if they could breathe. So when George Floyd’s murder went viral last week, something snapped.

We didn’t create the systems in our lifetimes, but we as white people benefit from them

As a white immigrant, I’m aware of my privilege. Under imperialism, Europeans spread out all over the globe, many as humble immigrants, but protected by colonial systems that opened the way for them. From Australia, to New Zealand, to South Africa, to all of the Americas, white people used racism to justify settling and looting resources. That’s why this uprising is resonating globally. We didn’t create the systems in our lifetimes, but we as white people benefit from them. Therefore, if we are silent on the subject, or say we don’t care, or we’re not privileged because we worked hard for what we have (hint: everyone worked hard), then we are colluding with a white supremacist system that will continue until we refuse to be a part of it. There’s no neutral position here.

My neighbour Valerie Sabbag and I discuss politics a lot, I am an Irish immigrant and she is a black American. We had maintained a strict quarantine for 10 weeks but then she said she was going to protest. So Valerie made washable paint to write on our cars. (Those are some serious elementary teacher/revolutionary skills there.) With our daughters, we joined a caravan protest in Oakland.

When we got to the protest in Oakland, we were struck that many people in the cars were not black. This was a black-led, multiracial, multigenerational protest against police terror of communities of colour. As we drove through Oakland honking horns and chanting, the boarded-up streets were lined with black people with fists raised in solidarity.

Valerie, who had witnessed the Rodney King riots in LA in 1992 as a student, said this felt different. “It made me realise that it wasn’t only people that look like me that believe the way I do. That lots of people want what I want. But it did make me wonder where they have been, and why it took this to get them all out there.” Even Barack Obama said in an address to the nation: “You look at those protests, and that was a far more representative cross section of America out on the streets, peacefully protesting. That didn’t exist back in the 1960s, that kind of broad coalition.”

The revolution may not be televised, but it will need to be internalised. The revolution will be exhausting and continuous. However, a new generation is finally seeing the repercussions of this web of white supremacy, violence and capitalism that has been entrenched for 500 years.

Emer Martin is an Irish novelist, painter and film-maker who lives in Oakland, California

1 Coronavirus: One death, 25 new cases reported in State
2 ‘My rent here is so low it’s a joke’
3 Johnny Depp: Ex-wife or friend defecated in bed in ‘fitting end’ to marriage, court hears
4 This charming man: how Paschal Donohoe won the Eurogroup presidency
5 Children who go abroad must self-isolate for 14 days before return to school in September
Real news has value SUBSCRIBE