Trump returns from Japan to barrage of criticism 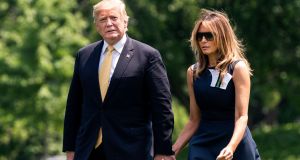 US president Donald Trump and wife Melania: “Kim Jong-un made a statement that Joe Biden is a low-IQ individual . . . I think I agree with him on that.” Photograph: Jim Lo Scalzo

US president Donald Trump arrived back in Washington after a four-day trip to Japan to face a storm of criticism over comments he made about former vice-president Joe Biden while abroad.

Though Mr Trump discussed global challenges including North Korea and trade during his meetings with Japanese prime minister Shinzo Abe, the current frontrunner in the race to become the Democratic nominee for president appeared to occupy the president’s thoughts during the visit.

Asked during his press conference with Mr Abe about a tweet he sent in which he said he “smiled” when Kim Jong-un described Mr Biden as a “low IQ” individual, Mr Trump doubled-down on the tweet.

“Kim Jong-un made a statement that Joe Biden is a low-IQ individual. He probably is, based on his record. I think I agree with him on that,” he said. He went on to attack Mr Biden’s record as vice-president.

“I can tell you that Joe Biden was a disaster, his administration with President Obama, they were basically a disaster when it came to so many things,” he said. “Whether it was economy, whether it was military, defence, no matter what it was. They had a lot of problems. So I’m not a fan.”

Further criticisms of Mr Biden followed on Tuesday when he highlighted the former vice-president’s support for the 1994 Crime Bill, which was seen by many to have paved the way for mass incarceration, particularly of African-Americans.

“That was a dark period in American History, but has Sleepy Joe apologised? No!” Mr Trump tweeted. “Anyone associated with the 1994 Crime Bill will not have a chance of being elected. In particular, African Americans will not be able to vote for you. I, on the other hand, was responsible for Criminal Justice Reform, which had tremendous support, & helped fix the bad 1994 Bill!”

Mr Trump was referring to the First Step Act, a bipartisan effort to reform the criminal justice system that was passed last year under his presidency.

Within minutes of Air Force One touching down in Washington on Tuesday, Mr Biden’s campaign team issued a statement accusing the president of taking the side of a “murderous dictator” while on foreign soil.

“The president’s comments are beneath the dignity of the office. To be on foreign soil, on Memorial Day, and to side repeatedly with a murderous dictator against a fellow American and former vice-president speaks for itself,” Mr Biden’s deputy campaign manager, Kate Bedingfield, said in a statement. “It’s part of a pattern of embracing autocrats at the expense of our institutions – whether taking [Vladimir] Putin’s word at face value in Helsinki or exchanging ‘love letters’ with Kim Jong-un.”

Mr Biden, who was due to make a campaign appearance in Texas on Tuesday, is leading the polls to become the Democratic nominee for president. The 76-year-old entered the race last month, joining a crowded field that now comprises 23 candidates.

As well as his comments about Mr Biden during his visit to Japan, Mr Trump also tweeted about other domestic subjects, including his clash with Democrats over the Mueller report.

“The Dems are getting NOTHING done in Congress! They only want a Do-Over on Mueller!,” he tweeted on Sunday. Another tweet by the president addressed the issue of impeachment. “Impeach for what, having created perhaps the greatest Economy in our Country’s history, rebuilding our Military, taking care of our Vets (Choice), Judges, Best Jobs Numbers Ever, and much more? Dems are Obstructionists!”