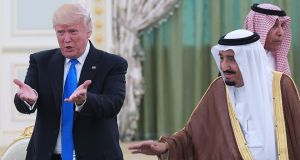 US president Donald Trump circumvented Congress on Friday by declaring an emergency over Iran and moving forward with arms sales to Saudi Arabia, the United Arab Emirates and Jordan that had been blocked by Congress since last year.

Mr Trump also announced Friday that he would order about 1,500 additional troops to the Middle East to increase protection of those US forces already there. The new deployment is less than what hard-liners in the White House were said to have wanted, and below what commanders in the region were considering.

With the pending arms sales, Mr Trump is back in a comfort zone of viewing diplomacy through a lens of economics and business deals, and the action reinforces White House support for the Saudis despite congressional pressure to punish Crown Prince Mohammed bin Salman after the killing in October of journalist Jamal Khashoggi in the Saudi Consulate in Istanbul.

The weapons sales decision immediately drew criticism, with fury over the civilian death toll from the Saudi-led air campaign in Yemen. With the two decisions, the Trump administration is rewarding allies like Saudi Arabia and arming them to counter Iran and its partner Arab militias, even as the president himself remains reluctant to more significantly increase the number of military personnel on the ground in conflict zones across the Middle East.

Both moves will almost certainly be seen by Iran’s clerical leaders as further escalations by Washington one year after Mr Trump withdrew from a 2015 nuclear containment deal, to which Iran was adhering, and reimposed harsh sanctions on the country.

The troop increase is far less than had been anticipated; US commanders in the region initially proposed asking the White House for an increase of 20,000, officials said. In the end, the actual troop increase will be 900 because 600 of the troops are already there and will simply see their deployments extended.

“We want to have protection,” Mr Trump said to reporters as he left the White House to travel to Japan for a state visit. “We’ll see what happens.” The move on arms sales drew strong condemnation. “I am disappointed, but not surprised, that the Trump administration has failed once again to prioritise our long-term national security interests or stand up for human rights, and instead is granting favors to authoritarian countries like Saudi Arabia,” said Senator Robert Menendez of New Jersey, the top-ranking Democrat on the Senate Foreign Relations Committee. – New York Times