US to send 1,500 more troops to Middle East as tensions with Iran rise 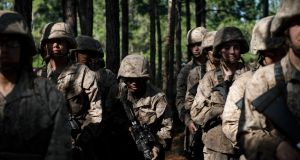 The United States is to send 1,500 extra troops to the Middle East as worries about tensions between the US and Iran persist.

President Donald Trump confirmed that the troops would be dispatched, but stressed that the measure was “mostly preventative”.

There have been mixed messages from the president about his intentions towards Iran, following signs of increased activity by the US in the region.

The administration recently dispatched an aircraft carrier and B52 bombers to the Persian Gulf. The state department also ordered non-emergency staff to leave the country’s embassy and consulates in neighbouring Iraq.

“We want to have protection in the Middle East,” Mr Trump told reporters as he left the White House on Friday for Japan, describing the latest deployment as “relatively small”.

His comments were echoed by the Pentagon, with acting defence secretary Patrick Shanahan describing the move as a deterrent.

“I don’t think Iran wants to fight ... but they cannot have nuclear weapons,” he said. “Under the Obama horrible agreement they would have had nuclear weapons within five years.”

As he left for his second visit to Japan as US president, Mr Trump also doubled down on his criticism of House speaker Nancy Pelosi, whom he denounced as “crazy” on Thursday.

Following the widespread dissemination of a doctored video on social media of Ms Pelosi, which attempted to show her slurring her words, Mr Trump said he knew nothing about the video. His personal attorney Rudy Giuliani retweeted the video, though later deleted the tweet.

However, late on Thursday the president did tweet a link to a video aired on Fox News which spliced video coverage of Ms Pelosi to suggest that the Californian Democrat was confusing her words.

In a new low in terms of relations between the two, both exchanged insults on Thursday following an acrimonious meeting in the White House the previous day.

As he left for Japan, Mr Trump stood by his comments, denouncing suggestions that he began the personal attacks.

“Did you hear what she said about me long before I went after her?” Mr Trump said to reporters. “She made horrible statements. She knows they’re not true. She said terrible things, so I just responded in kind. Look, you think Nancy’s the same as she was? She’s not.”

Mr Trump was also asked about his decision on Thursday to order US intelligence agencies to co-operate with attorney general William’s Barr investigation into alleged FBI surveillance of the Trump team in the run-up to the 2016 election.

Mr Trump gave Mr Barr unilateral authority to declassify information. Describing Mr Barr as “a great gentleman and a highly respected man”, Mr Trump predicted that the investigation would expose “how the hoax or witchhunt started and why it started”.

“It was an attempted coup, an attempted takedown of the president of the United States, it should never ever happen to anybody else.”

The action taken by Mr Trump to allow the attorney general to declassify material was a highly unusual move, giving Mr Barr expansive powers over the investigation and the material he can demand from the intelligence agencies.

Critics also pointed out that the move could unnerve US allies who share classified information with the US.