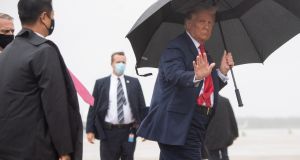 Donald Trump boards Air Force One prior to departure from Joint Base Andrews in Maryland as he travels to campaign in Florida. Photograph: Saul Loeb/AFP via Getty Images

US president Donald Trump is planning to hold multiple campaign events each day in the run-up to election day despite his recent coronavirus diagnosis, his campaign team said yesterday as the president left Washington for a rally in Florida last night.

In a briefing with reporters, Trump campaign advisor Jason Miller said that the president is “eager to get back out there,” and was “getting on my case for not having enough rallies and public events scheduled. He’s ready to go – two to three events a day”.

Already, Mr Trump has a packed schedule in the coming days, in spite of his recent hospitalisation for coronavirus. He will hold a campaign rally in Johnstown, Pennsylvania tonight, followed by an event in Des Moines, Iowa on Wednesday evening. On Thursday he will visit North Carolina, a key swing state in November’s election.

Mr Trump’s return to the campaign trail comes as the latest polls show the president trailing his Democratic opponent Joe Biden. A Washington Post-ABC poll on Sunday showed that Mr Biden had widened his lead to 12 points nationally among likely voters.

The president’s departure for Florida last night came a week after he was discharged from the Walter Reed Medical Center where he was treated for Covid-19. While White House physician Sean Conley says the president is “no longer considered a transmission risk to others,” he has not confirmed when he last tested negative for the virus.

Meanwhile, top immunologist Dr Anthony Fauci has objected to the inclusion of his words in a campaign ad launched by the Trump administration.

The 30-second ad includes a clip from Mr Fauci saying: “I can’t imagine that … anybody could be doing more,” to tackle the virus. But the comments were a reference to the overall federal effort, not the president specifically.

In a statement, Mr Fauci said: “In my nearly five decades of public service, I have never publicly endorsed any political candidate. The comments attributed to me without my permission in the GOP [Republican] campaign ad were taken out of context from a broad statement I made months ago about the efforts of federal public health officials.”

Polls show that most Americans disapprove of Mr Trump’s handling of the pandemic which has led to the loss of approximately 215,000 lives and infected millions of Americans, including the president, the First Lady and members of his administration including his speech writer Stephen Miller and press secretary Kayleigh McEnany.

Mr Trump spent much of the day at the White House yesterday before his departure for Florida tweeting. “Heading to the Greatest Economy Of All Time!!! VOTE,” he tweeted, as he seeks to hone his economic message ahead of November’s election.

As his Democratic opponent Joe Biden campaigned in Ohio, the president tweeted: “Almost nobody showed up to the Sleepy Joe Biden “Rally” in Ohio. The reporting and polls are a Media Con Job - Fake News. We have far more support and enthusiasm than even in 2016. November 3rd. will be a great day for America!!!”