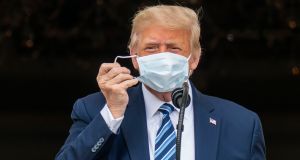 US president Donald Trump will travel to Florida on Monday for his first campaign event outside Washington since his diagnosis with coronavirus.

Mr Trump will address supporters at an airport in Sanford, just north of Orlando, on Monday evening. It comes as he suggested he is “immune” from the virus.

“It seems like I’m immune, so I can go way out of a basement, which I would have done anyway,” he said in a Fox News interview on Sunday. “The president is in very good shape to fight the battles . . . I beat this crazy horrible China virus . . . I passed the highest test, the highest standards, and I’m in great shape, and I have to tell you, I feel fantastically. I really feel good.”

It follows an update from the president’s physician Sean Conley on Saturday night stating that Mr Trump is “no longer a transmission risk to others”. In a memo released by the White House, Mr Conley said that there is “no longer evidence of actively replicating virus” according to diagnostic tests of the president.

The president continued to be “fever-free”, he said, with all symptoms “improved”. But the letter did not disclose when the president last tested negative for the virus – a key indication of when he first became infectious and whether he is officially free of the virus.

Mr Trump made his first public appearance on Saturday since his release from hospital a week ago when he held a campaign-style event on the south lawn of the White House.

The event immediately prompted accusations that Mr Trump was using the office of the president to promote his own re-election campaign, while also potentially putting the lives of hundreds of people in danger given his recent Covid-19 diagnosis.

Arriving to shouts of “USA, USA” as he appeared on the balcony of the White House to the tune of Hail to the Chief, Mr Trump attacked his presidential rival Joe Biden and the Democratic party.

“We cannot allow our country to become a socialist country,” he said to cheers, warning that Democrats would open “your border to mass immigration”.

“If the left gains power, they will launch a nationwide crusade against law enforcement – taking away their funds, their firearms, and their fundamental authorities,” he said. “It is time for all Americans to stand up and reject the campaign of slander against our police.”

Mr Trump was addressing a group of supporters who were also attending a separate “Back the Blue” event in Washington DC, designed to outline support for law enforcement officers.

Most of those in the crowd wore distinctive “Back the Blue” T-shirts and Make America Great Again hats. During the speech they periodically broke into shouts of “We love you” and “Four more years”. While some were wearing masks, social distancing was not observed.

Trump administration officials insisted that the event was not in breach of the Hatch Act, which prohibits federal employees from engaging in political activity, because no Trump re-election campaign staff were involved.

Declaring that next month’s election is “the single most important election in the history of our country”, Mr Trump told the crowd: “We have a level of support the likes of which no one has ever seen.

Meanwhile, the Commission on Presidential Debates has cancelled next Thursday’s scheduled debate between the two candidates. Mr Trump declined to participate in a virtual debate, as had been proposed by the commission, accusing the independent body of “trying to protect Biden”.

Asked in an ABC interview on Sunday if the president would participate in the final presidential debate, scheduled for October 22nd, Mr Trump’s son Eric said: “My father wants to stand on the stage with his opponent . . . [He] doesn’t want to do it over a glorified conference call.”