It’s ‘bigotry’ to say someone is too Catholic to be on bench, Amy Coney Barrett hearing told 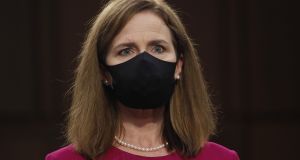 US supreme court nominee Amy Coney Barrett pledged to uphold the independence of the court if confirmed by the US Senate, as she began four days of congressional testimony on Monday.

Wearing a face covering, Ms Barrett appeared at her confirmation hearing in Washington accompanied by her family, with much of the first day given over to opening statements by the Senate judiciary committee’s 22 members.

Addressing the senators, President Donald Trump’s nominee said that, as a judge, she had done her utmost in every case “to reach the result required by the law”.

“I believe Americans of all backgrounds deserve an independent supreme court that interprets our constitution and laws as they are written. And I believe I can serve my country by playing that role,” she said.

In an unexpected move, Utah senator Mike Lee, who tested positive for coronavirus just over a week ago after attending the White House event announcing Ms Barrett’s nomination on September 26th, appeared in person at the committee, removing his mask when he spoke.

Some other senators, including North Carolina’s Thom Tillis, who also tested positive for Covid-19, and Texas senator Ted Cruz, who is self-isolating following contact with Mr Tillis, participated by video link.

Opening proceedings, judiciary committee chairman Lindsey Graham defended the decision to hold the hearing so close to an election. “There’s nothing unconstitutional about this process. This is a vacancy that has occurred through a tragic loss of a great woman,” he said, referring to the late justice Ruth Bader Ginsburg. “And we’re going to fill that vacancy with another great woman. The bottom line here is that the Senate is doing its duty, constitutionally.”

Other Republican members of the committee accused Democrats of attacking Ms Barrett on the basis of religion. Josh Hawley, a conservative Trump supporter from Missouri who was elected to the Senate in 2018, said freedom of conscience and religious liberty is a “bedrock principle of American liberty”.

“Judge Barrett is a Catholic. We all know that. She’s a devout Catholic, we all know that. She and her husband have chosen to raise their family according to their Catholic beliefs ... When you tell somebody they’re too Catholic to be on the bench ... that’s bigotry,” he said.

But Democrats used their opening statements to focus on possible threats to the Affordable Care Act, also known as Obamacare. The Trump administration has joined several Republican states in challenging the constitutionality of the Act at the supreme court, with the court due to hear oral arguments in the case on November 10th – exactly a week after election day.

“President Trump has been very clear about what he’s doing, he’s repeatedly promised to appoint a supreme court nominee who will strike down the Affordable Care Act,” said Senator Mazie Hirono of Hawaii. “By nominating Amy Coney Barret, President Trump is keeping his promise.”

Mr Trump took to Twitter during the hearings to defend his party’s record on healthcare: “Republicans must state loudly and clearly that WE are going to provide much better Healthcare at a much lower cost,” he wrote.