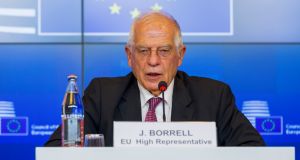 The member states of the European Union agreed on Monday to impose sanctions on Russians suspected of a role in poisoning Kremlin critic Alexei Navalny.

The bloc also agreed to place sanctions on Alexander Lukashenko, who is accused of rigging an election in Belarus and orchestrating a brutal crackdown on pro-democracy protesters in its wake.

The decisions were reached at a meeting of the EU’s foreign ministers in Luxembourg, at which France and Germany put forward a proposed list of Russian targets for sanctions in response to the assassination attempt, in a sign of a hardening stance towards Moscow.

EU foreign affairs chief Josep Borrell told reporters the group had discussed “a strong EU common response to the use of a prohibited chemical nerve agent” and “restrictive measures against those linked to this assassination attempt” proposed by France and Germany.

“There has been a political agreement to implement these restrictive measures,” Mr Borrell said.

No detail was given on which individuals would be targeted by the sanctions, but member states are thought to favour imposing asset freezes and travel bans on officials from Russia’s GRU military intelligence agency.

The list of targets for sanctions was made up of “certain people that caught our eye in this respect”, German foreign minister Heiko Maas said as he arrived for the meeting. He added that the poisoning could not “remain without consequences”.

Mr Navalny, a long-time critic of the regime of Russian president Vladimir Putin who has worked to expose official corruption in a series of high-impact exposés, was taken to Germany for hospital treatment after collapsing on a flight in Siberia in August after drinking what his allies said was poisoned tea.

The German government said blood tests found “unequivocally” that Mr Navalny was poisoned with Novichok, a kind of nerve agent developed by the Soviet military that Britain maintains was also used in an attack on a Russian double agent in England in 2018.

Moscow dismisses accusations of state involvement as “anti-Russian propaganda” and accused the EU of “acting without trial” after the sanctions decision.

Legal texts outlining the sanctions will now be prepared and cleared by experts in the 27 EU member states before they are finalised.

Mr Borrell acknowledged the EU’s relationship with Russia was complex, as it continues to engage with Moscow in several areas including on trying to encourage a ceasefire in the conflict between Armenia and Azerbaijan over the disputed territory of Nagorno-Karabakh.

The sanctions on Mr Lukashenko come as authorities in Belarus, a former Soviet republic closely allied with Russia, continue a crackdown against protesters who have filled the streets to demand a new presidential election and accuse the long-time leader of rigging the ballot in August.

“Ministers reconfirmed that Mr Lukashenko lacks any democratic legitimacy,” Mr Borrell said after the EU foreign ministers met. “Business-as-usual is no longer possible in our relations.”

The bloc had previously sanctioned about 40 Belarusian officials accused of helping to steal the election and orchestrate the repression against protesters, but has now extended the sanctions against Mr Lukashenko himself.