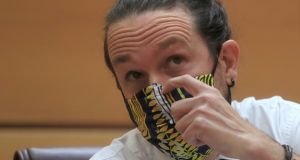 A legal storm, triggered by the theft of the telephone of a former adviser to a cabinet minister, has unleashed a new crisis for Spain’s coalition government.

The case dates from 2015 and the theft of the mobile phone of Dina Bousselham, an aide to Mr Iglesias when he had been an MEP. Several weeks later the head of the Zeta media corporation, Antonio Asensio, gave the phone’s memory card to Mr Iglesias, who then waited several months before returning it to Bousselham.

In the meantime, the right-wing news site OKdiario published some embarrassing text messages sent from the Podemos leader to colleagues. Mr Iglesias and his legal team tried, unsuccessfully, to have OKdiario investigated on the grounds that the published material had come from the stolen phone.

An investigation was eventually opened after it emerged that a retired police officer, José Manuel Villarejo, had a copy of the phone card. Mr Villarejo is in prison awaiting trial for several crimes linked to his alleged blackmailing of and spying on public figures. Mr Iglesias has frequently identified Mr Villarejo and Okdiario as being part of a right-wing, deep-state apparatus known as the “state sewers”, which has Podemos in its sights.

“Dear friends in the state sewers, we are in government,” Mr Iglesias said in March, taunting his alleged antagonists, shortly after he had formed a coalition government with the Socialist Party of Pedro Sánchez.

But, with the latest twist in the case, Mr Iglesias has gone from being a victim to a possible suspect. The judge’s accusations centre on the fact Mr Iglesias kept the phone card for such a long time before returning it, dismissing the politician’s assertion that he did so to protect Ms Bousselham. The magistrate also claims that the phone card, which contained intimate photos of its owner, was damaged when returned to her.

In addition, García Castellón accuses Mr Iglesias of trying to use the whole affair for political ends by falsely claiming that the theft was part of a deep-state strategy against Podemos. According to the judge’s theory, it was Mr Iglesias’s circle that leaked the material from the phone in order to incriminate Okdiario and fuel his conspiracy claims.

In the court document, the judge describes this as “a conscious and planned fake performance organised by Iglesias, pretending before public opinion and his own electorate to be the victim of a crime which he knew was non-existent just weeks before a general election”.

The affair, known as “the Dina case”, has now become a major problem for the coalition government, distracting attention from its own agenda and providing the opposition with ammunition. The release of the judge’s findings last Wednesday, for example, overshadowed the Sánchez government’s unveiling of a long-term economic plan on the same day.

“If Pedro Sánchez does not fire [Iglesias] today, the shadow of corruption will fall on his whole government,” said Teodoro García Egea, spokesman for the opposition Popular Party (PP). The PP was itself removed from government in 2018 due to a barrage of corruption cases.

So far Sánchez has rejected such calls, expressing support for Mr Iglesias, who is one of four deputy prime ministers.

Podemos’s legal team sees glaring faults in the case against Mr Iglesias. Among other things, it points out that Ms Bousselham does not appear willing to press charges against her former boss, undermining the accusation of revealing secrets. Also, even the judge has admitted there is no “direct evidence” that the phone card has been tampered with.

The supreme court, which is the only tribunal able to try Mr Iglesias due to his parliamentary immunity, will now request a non-binding report from the state prosecutor before deciding whether to proceed and investigate the politician.

Mr Iglesias has said it is “inconceivable” that the supreme court would do so. He has also reiterated his claim that the case against him is politically driven.

“The right wing in this country is determined to use any means necessary – legitimate and illegitimate, legal and illegal – to bring this government down,” he said.