US president Donald Trump has lashed out at adviser Kellyanne Conway's husband, calling him "a whack job", before going on to later say that he "never liked" deceased US senator John McCain. Video: C-Span/The White House 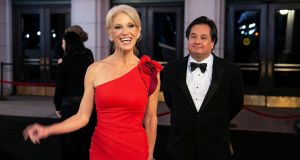 US president Donald Trump doubled down on his criticism of the late senator John McCain on Tuesday in a speech in Ohio, saying he “wasn’t a fan”. Speaking at an event at a manufacturing centre in Lima in the midwestern state, Mr Trump said he had given the former senator and Vietnam war hero “the kind of funeral that he wanted . . . I didn’t get a thank-you, that’s okay.”

Criticising Mr McCain’s record on veteran affairs and healthcare, he said: “I’ve never liked him much – hasn’t been for me.”

His comments marked the latest criticism by the president of the late senator who survived captivity in the Vietnam War. On Saturday, Mr Trump tweeted comments by former special counsel Ken Starr which claimed that Mr McCain’s involvement in circulating a disputed document about Mr Trump’s links with Russia was a “dark stain” on his legacy.

But Mr Trump remained defiant on Monday during his meeting with Brazilian president Jair Bolsonaro, telling reporters: “I was never a fan of John McCain, and I never will be.”

Even before his comments in Ohio, Mr Trump had received pushback from Republicans, with senator Johnny Isakson branding his comments “deplorable”.

Mr McCain was not the only target of Mr Trump’s ire on Tuesday. He also renewed his attacks on George Conway, the husband of his adviser Kellyanne Conway, describing him as a “whack job”.

Mr Conway, a lawyer who is well known in Republican circles, has been a frequent critic of Mr Trump. “I don’t know him. He’s a whack job, there’s no question about it,” the president said as he prepared to leave Washington for Ohio. “I think he is doing a tremendous disservice to a wonderful wife. Kellyanne is a wonderful woman and I call him Mr Kellyanne.”

His comments came after Mr Conway questioned Mr Trump’s mental health in a tweet earlier in the week.

“Congratulations! You just guaranteed that millions of more people are going to learn about narcissistic personality disorder and malignant narcissism! Great job!” he tweeted after Mr Trump referred to him as a “total loser” on Twitter.

Early on Tuesday Mr Trump said that Mr Conway was jealous of his wife’s success and was angry that he hadn’t been given a job by Mr Trump. “I barely know him but just take a look, a stone cold LOSER & husband from hell!” he said.

Mr Conway, a respected conservative lawyer, withdrew from consideration from a job in the justice department under the Trump administration.

Though he has been a consistent critic of Mr Trump – he co-wrote an opinion piece in the New York Times in November which argued that the appointment of Matthew Whitaker as acting attorney general was unconstitutional – he has ramped up his public criticism of the president in recent days.

In her first comments on the growing public acrimony between the two, Ms Conway defended the president. “He left it alone for months out of respect for me,” she told Politico. “But you think he shouldn’t respond when somebody, a non-medical professional, accuses him of having a mental disorder? You think he should just take that sitting down?”

The Conways got to know Mr Trump when they lived in an apartment in Trump Tower in New York. Ms Conway was an early adviser to the president when he contested the 2016 presidential election.