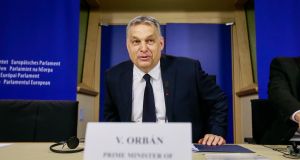 Hungarian prime minister Viktor Orbán gives a press conference at the end of the European People’s Party assembly at the European Parliament in Brussels, Belgium, on Wednesday. Photograph: Stephanie Lecocq/EPA

Hungary’s ruling Fidesz party has been suspended from its powerful conservative alliance in the EU after other parties in the centre-right group turned against Hungarian prime minister Viktor Orbán’s illiberalism and tirades against Brussels.

In a rare rebuke, delegates from the European People’s Party (EPP) on Wednesday voted to immediately and indefinitely suspend Fidesz’s membership.

Fidesz, led by the Hungarian prime minister, has been accused of undermining the rule of law in Hungary and has launched poster campaigns vilifying Jean-Claude Juncker, the European Commission president and an EPP member.

After a three-hour debate in Brussels, EPP officials voted by a margin of 190 to three to strip Fidesz of its voting rights and its ability to appoint candidates for internal EPP jobs. The motion had the backing of powerful centre-right parties, including Germany’s conservative Christian Democrats – led until recently by chancellor Angela Merkel and now headed by Annegret Kramp-Karrenbauer – and France’s Les Républicains.

Manfred Weber, the EPP’s leader in the European Parliament and its Spitzenkandidat, or leading candidate, to succeed Mr Juncker, said the group had taken a “clear decision” on Fidesz after a “frank, honest and hard discussion”.

“The message was crystal clear today, and I am proud the EPP could make obvious to the outside world that Fidesz would not have any say over the future developments of the EPP,” said Mr Weber.

Afterwards Mr Orbán called the outcome a “good decision” and a compromise.

“Fidesz wishes to remain a member of the EPP. A good decision has been taken. We can organise a strong campaign and we can continue to support Mr Weber as Spitzenkandidat,” he said.

The EPP is the EU’s largest political grouping. It also counts the Austrian chancellor, Sebastian Kurz, and Donald Tusk, president of the European Council, as members.

Mr Orbán has mounted an increasingly robust challenge to the EPP and EU from within as he has pursued policies that have clashed with the union’s rules and values. Last year the European Parliament voted to start disciplinary proceedings against Hungary over alleged breaches of the rule of law.

The EPP’s patience with the Hungarian prime minister, who styles himself as the defender of “Christian democracy”, ran out after he stepped up attacks on pro-EU conservatives in the run-up to the European elections in May. Mr Orbán had labelled critics of Fidesz inside the EPP as “useful idiots” who were serving the needs of political opponents.

Ahead of the vote, Fidesz had threatened to quit the EPP if delegates decided to suspend Mr Orbán unilaterally. Instead, the final motion said Fidesz and the EPP had “jointly” agreed to suspend the party’s membership until an independent monitoring group reported back to the alliance on Fidesz’s compliance with EPP values.

Mr Orbán described the wise men as a “solution and way to break the deadlock” over Fidesz’s future. – Copyright The Financial Times Limited 2019