Elon Musk said: ‘That 1% chance isn’t worth rolling the dice. Better to wait a day’ 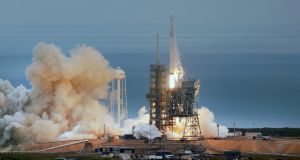 The SpaceX Falcon rocket launches from the Kennedy Space Center in Florida on Sunday carrying a load of supplies for the International Space Station. Photograph: Red Huber/Orlando Sentinel via AP

SpaceX successfully launched a Falcon 9 rocket on Sunday on a resupply mission to the International Space Station (ISS) that marks a new era of private spaceflight at one of the Nasa’s most storied bases.

A Falcon 9 rocket took off at about 9.40am eastern time (2.40pm Irish time) from the Kennedy Space Center, off the coast of central Florida, from a launchpad that has seen off some of Nasa’s most famous missions but has gone unused since the agency retired its space shuttle fleet in 2011.

After twin sonic booms of re-entry through skies mottled with clouds, the rocket’s landing legs deployed, its thruster engines fired and the rocket landed, almost delicately, at a landing pad at Cape Canaveral. A few minutes later, the Dragon capsule detached into orbit and its solar arrays deployed.

The launch was delayed on Saturday for almost 24 hours, after engineers found “the movement trace of an upper-stage engine steering hydraulic piston was slightly odd”, CEO Elon Musk said on Twitter. “If this is the only issue, flight would be fine, but need to make sure that it isn’t symptomatic of a more significant upstream root cause.

“That 1 per cent chance isn’t worth rolling the dice. Better to wait a day,” he added.

The Dragon capsule lifted by the rocket carries nearly 5,500lb of supplies, experiments and research equipment for the six astronauts – two Americans, three Russians and one Frenchman – onboard the station. The capsule is due to dock at the station two days after launch, when astronauts will use a 57ft robotic arm to secure it.

The capsule’s cargo includes an experimental spacecraft self-navigation system; a medical experiment on immune system diseases; an instrument to measure ozone, aerosols and other gases in the atmosphere; and the Lightning imaging sensor, a device to measure lightning strikes and their intensities around the world. The astronauts will later load up the capsule with experiments to be returned to Earth and recovered by scientists after landing.

For most of its decades in service, the Kennedy Space Center has served the US as one of the federal government’s most important spaceports. Astronauts flew from Kennedy on missions to the moon in the late 1960s and early 1970s, and in the 1980s the centre was home to Nasa’s reusable space shuttles. Saturday’s launch was the first since that fleet retired, and part of the centre’s transition to a spaceport open to public and private missions.

Over its years of competing with Boeing and Lockheed Martin for deals, SpaceX has secured $1.6 billion in contracts with the US government for resupply missions, and hundreds of millions more in contracts with private companies seeking to deliver satellites into orbit.

The private spaceflight company was dealt a major setback in September 2016 when one of its rockets exploded on a Cape Canaveral launchpad, according to Musk, because its supercooled oxygen fuel became too cold – and solid – and ignited in reaction with other chemicals. The subsequent blast destroyed not only the hugely expensive rocket but also its cargo, which included a satellite project funded in part by Facebook.

The company successfully launched and landed a reusable Falcon 9 rocket in January, delivering 10 satellites for the telecoms and technology giant Iridium.

Musk has repeatedly said he hopes to launch manned missions, and last year announced an ambitious plan to reach Mars with the first ever private, unmanned mission. But on Friday, the SpaceX president, Gwynne Shotwell, told reporters that the company had delayed the project for a scheduled 2020 launch.

“We were focused on 2018, but we felt like we needed to put more resources and focus more heavily on our crew program and our Falcon Heavy programme,” Shotwell she said.

Nasa currently relies on Russian spaceports to deliver astronauts to the ISS, and SpaceX has plans to modify its rockets and capsules for crewed flights by 2018, though a report by the Government Accountability Office suggested the schedule was overly optimistic. Nasa has also planned a rover mission to Mars in 2020.