Renzi resigns as Democratic Party leader in challenge to foes 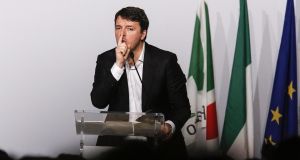 Former Italian prime minister Matteo Renzi has resigned as head of the ruling Democratic Party (PD), opening the way for a leadership fight when he will take on foes who are threatening to rip apart the centre-left group.

Battling for his political life, Renzi made clear he would seek re-election and warned that the PD’s internal feuding was proving a gift to its main opponent in parliament, the anti-establishment Five-Star Movement.

Ten years after its foundation, the PD is on the cusp of a schism that risks bringing yet more political instability to the euro zone’s third largest economy, which has been mauled by years of recession, high unemployment and towering debts. PD dissidents, including former leader Pierluigi Bersani, say the party has shifted too far from its leftist roots. Renzi’s supporters say they are driven by personal animosity and are looking to expand their influence in a period of flux.

“The only word worse than ‘schism’ is the word ‘blackmail’ . . . To ask me to leave is not democratic,” Renzi told a party assembly in a smart Rome hotel on Sunday, confirming he would stand again for the PD leadership that he first won in 2013. He did not announce when the ballot would be held, but allies say he is keen to hold it before local elections in June, fearing defeat for the PD then could sink his chances.

Renzi quit as prime minister in December after losing a referendum on his plans for constitutional reform. He is eager to hold a national election as soon as possible in an attempt to regain power. His opponents want parliament to carry on until the scheduled end of its term in early 2018, arguing that the PD needs time to draw up a more left-leaning manifesto that bolsters welfare spending and offers no favours to big business.

Recent opinion polls have put the PD neck-and-neck with the Five-Star Movement, founded by Beppe Grillo, which wants a referendum on Italy’s euro membership. “Oh Beppe, what a fine present we are offering you by only talking about ourselves,” Renzi said.

Many commentators had expected the dissidents to announce their breakaway movement, but they held back from the brink, preferring instead to keep on pounding at Renzi. “I am not happy with what I heard here,” Bersani told state RAI television.

If Bersani and his friends do form a new party, polls say they could win well over 5 per cent of the vote. With the next election likely to be held under proportional representation, such a result could give them more power in the next parliament than if they remain in a Renzi-dominated PD.

In the street outside the party meeting, a few PD supporters came to urge their leaders to stick together. “It is vital that we remain united,” said Rome architect Emma Cavallucci, holding the hand of her toddler daughter. “Our leaders only seem to be talking to each other, not to the world outside. Don’t they realise the damage they are doing us?” – (Reuters)

1 Level 5 enforcement: Fines being considered for house parties and breaking 5km rule
2 Life under Level 5: What will the next six weeks look like for the State?
3 Covid-19: State moves to Level 5 for six weeks with hopes of ‘meaningful’ Christmas celebrations
4 Six weeks of Level 5: Non-essential shops to close, no visitors to homes and a 5km travel limit
5 Cork city centre is hit by flooding as river Lee bursts its banks
Real news has value SUBSCRIBE