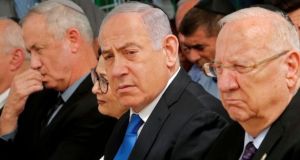 Mr Gantz told president Reuven Rivlin on Wednesday that he was unable to form a parliamentary majority after his last-minute attempts to convince Mr Netanyahu to give up the premiership and join a unity government failed.

Neither Mr Netanyahu nor Mr Gantz have been able to secure a governing majority after deadlocked elections in April and September. Mr Netanyahu has refused to abandon his ultrareligious rightwing allies and Mr Gantz has refused to allow Mr Netanyahu to serve as prime minister in a unity government unless he clears his name concerning corruption allegations. The deadlock raises the prospect of an unprecedented third attempt at the polls early next year.

“We need to tell the public the truth - Netanyahu is a unity rejectionist and he is going to do everything possible to force us into elections,” said Mr Gantz after the talks collapsed. “I’m prepared to make compromises, without conceding fundamental principles.”

A retired military chief, Mr Gantz has risen to near the top of Israeli politics since he entered political life in January. His mandate to form a governing coalition expired at midnight on Wednesday.

Mr Netanyahu is facing a potential indictment on charges of bribery, fraud and breach of trust, that could be announced any day. The interim prime minister denies the charges and has described the indictment as a witch-hunt designed to topple his rightwing government, which has led the country for the past decade.

For Mr Netanyahu, contesting the indictment even as interim prime minister has a legal advantage: there is an established legal precedent requiring members of parliament to step down while under indictment, but that precedent does not apply to the prime minister.

“We are in absolutely uncharted territory,” said Yuval Shany, a professor at Hebrew University and senior researcher at the non-partisan Israel Democracy Institute. “For the first time in history, we have reached a situation where twice you cannot form a government, under the specific context of a PM facing criminal charges. This is the perfect storm we are experiencing.”

Avigdor Lieberman, a secular rightwing parliamentarian and kingmaker, had hoped he could bring Mr Netanyahu and Mr Gantz together in a governing coalition but came up short.

“As far as I am concerned, they’re both guilty,” Mr Lieberman told reporters on Wednesday afternoon. “I left no stone unturned in my attempt to reach a unity government like we promised. If we are dragged into elections, it will be because of a lack of leadership.”

Mr Lieberman added that he would not consider joining a minority government supported by the Joint List of Arab parties, which emerged as the third-largest parliamentary group after the September rerun with 13 seats in the Knesset. Mr Gantz had flirted with the possibility of an interim administration with their support but was assailed by Mr Netanyahu, who has smeared the Arab-Israeli leaders as supporters of terrorism.

The Knesset can now either nominate another member of parliament to try again to form a governing coalition or call third elections. No candidate has offered to take up the challenge so far.

Underscoring the stakes, Israel last night carried out a large-scale strike against Iranian targets in Syria, hitting what the Israel Defense Forces said were surface-to-air missiles and weapons warehouses at bases controlled by the elite Quds Force of the Iranian military. At least seven non-Syrians, likely Iranians, were killed, and after the Syrian military fired missiles at Israeli jets, the Israelis also hit Syrian targets, the military said.–The Financial Times Limited