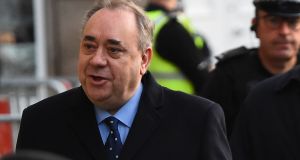 Former Scottish first minister Alex Salmond: “I refute these allegations of criminality and I will defend myself to the utmost in court,” he said. Photograph: Andy Buchanan/AFP via Getty Images

Alex Salmond, former first minister of Scotland and one of the most important figures in modern Scottish politics, appeared in court on Thursday to face 14 charges of attempted rape and sexual and indecent assault.

Mr Salmond (64), who was instrumental in making independence from the UK the central issue in Scottish politics, pleaded not guilty to all the charges, which involve accusations of assault against 10 women at locations around Scotland between 2008 and 2014.

An indictment prepared by prosecutors ahead of a preliminary hearing at Edinburgh’s high court on Thursday gave the first official confirmation of details of the accusations against the former leader of the Scottish National party.

Mr Salmond is accused of attempting to rape one woman at the then first minister’s official residence in Edinburgh in 2014 and of sexual assault with intent to rape of another woman at the residence the year before.

One of the other 10 alleged sexual assaults was said to have taken place just days before the September 18th, 2014, independence referendum, in which voters backed staying in the UK by 55 per cent to 45 per cent. Mr Salmond is also charged with two cases of indecent assault.

“I’m innocent and I will defend my position vigorously,” Mr Salmond said in a short statement outside the court.

The former first minister stepped down as leader of the SNP after the 2014 independence referendum and was elected a member of the UK parliament the following year. He lost the seat in the 2017 general election.

Mr Salmond said he had lodged a defence statement with the court. “I am also conscious we are in the middle of a general election campaign. I’m not going to say anything which would influence that democratic process.”

The preliminary hearing at the high court in Edinburgh before Lady Dorrian, Scotland’s second-most senior judge, is intended to pave the way for a trial early next year.

Details of the accusations against Mr Salmond, who was first charged in January, risk casting a shadow over the SNP during what the party says is one of the most important UK general elections for Scotland.

However, the controversy surrounding its former leader has not appeared to have had a major impact on the party’s popularity, with the most recent polls suggesting it still commands a large lead over its rivals in Scotland.

The case could add to growing strains within the SNP, which has in recent years been one of the UK’s most united and disciplined political forces.

Mr Salmond has remained popular among many party activists. Some see him as sharing their impatience with what they believe is a lack of progress achieved by Nicola Sturgeon, his successor as SNP leader and first minister, in forcing a second independence referendum.

The Scottish government announced in August that it had paid more than £500,000 to cover the legal costs Mr Salmond incurred during his successful challenge to a botched government investigation into sexual misconduct allegations against him.

A Scottish parliamentary committee set up by Ms Sturgeon to look into the handling of the accusations against Mr Salmond has been put on hold until the conclusion of the criminal proceedings against her predecessor and former mentor.

Opposition parties have raised questions about a series of conversations Ms Sturgeon had with Mr Salmond after the start of a civil service-led investigation last year into his conduct. Ms Sturgeon has insisted she had no involvement in the investigation.

Lady Dorrian said there would be a further preliminary hearing on January 22nd, with the trial scheduled to begin in Edinburgh on March 9th. Mr Salmond’s lawyer said the trial was expected to last about four weeks. – Copyright The Financial Times Limited 2019