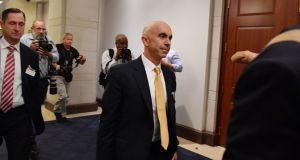 Donald Trump denounced Barack Obama as a “grossly incompetent” president as he arrived back in Washington DC on Sunday following a weekend retreat with allies at Camp David.

Asked about his predecessor’s criticism of the US response to the coronavirus pandemic during an online address to students on Saturday, the US president said he had not heard the remarks. But he added: “Look, he was an incompetent president, that’s all I can say. Grossly incompetent.”

Mr Trump’s comments are his latest attack on Mr Obama, who has made a number of interventions in recent weeks after keeping a low profile since completing his second term of office in January 2017.

In two “virtual” speeches at the weekend, Mr Obama said officials in Washington “aren’t even pretending to be in charge” of the coronavirus pandemic, adding that the virus had “torn back the curtain on the idea that so many of the folks in charge know what they’re doing”.

He urged his audience of graduating students to think “not only about ourselves, but also about each other” as they begin the next stage of their lives.

Mr Trump, who spent the weekend at Camp David, the president’s Maryland retreat, with Republican members of Congress and aides, did not comment on the deepening controversy over his decision to fire a top government watchdog late on Friday night.

Democrats have launched an investigation into Mr Trump’s abrupt dismissal of State Department inspector general Steve Linick – the latest move by the president to remove independent inspectors from their positions.

Mr Trump dismissed Mr Linick from his post amid reports that the government official was examining secretary of state Mike Pompeo’s deployment of an employee to conduct personal activities for him and his wife.

Mr Linick is the fourth inspector general to be removed by Mr Trump in recent months. Inspectors general are tasked with overseeing government agencies to ensure that no mismanagement or fraud occurs.

He also recently removed the acting inspector general at the defence department, Glenn Fine, and the watchdog at the Department of Health and Human Services, Christi Grimm.

As required by law, Mr Trump notified Congress of his decision to remove Mr Linick in a letter on Friday night. “It is vital that I have the fullest confidence in the appointees serving as inspectors general,” he wrote. “That is no longer the case with regard to this inspector general.”

In a joint statement, senior Democrats Eliot Engel from New York and Senator Bob Menendez, announced an investigation and urged the White House to turn over documents relating to Mr Linick’s dismissal. The two lawmakers said the dismissal was “transparently designed to protect Secretary Pompeo from personal accountability”,  and undermined “the foundation of our democratic institutions”.

House speaker Nancy Pelosi pointed to a “dangerous pattern of retaliation against the patriotic public servants charged with conducting oversight on behalf of the American people”.

Some Republicans also rebuked the president, including Utah senator Mitt Romney – the only Republican to vote in favour of two articles of impeachment against Mr Trump earlier this year.

“The firings of multiple inspectors general is unprecedented; doing so without good cause chills the independence essential to their purpose,” he wrote on Twitter. “It is a threat to accountable democracy and a fissure in the constitutional balance of power.”

Mr Trump has frequently spoken about what he believes is a “deep state” conspiracy among members of the federal government and the intelligence community against his presidency. Mr Linick was appointed by then president Barack Obama in 2013. Stephen Akard, an ally of vice-president Mike Pence, was named by Mr Trump as Mr Linick’s replacement.

1 Thomas Byrne denies being source of Barry Cowen drink driving story
2 US passengers fly into Dublin: ‘I’m here for six days. I guess I’ll have to stay inside’
3 People with foreign accents should not be ‘assumed’ tourists - NPHET
4 Maureen Dowd: Biden has his limitations but he’s no Trump
5 Covid-19: 200 to 250 people arriving in Ireland from US daily - Coveney
Real news has value SUBSCRIBE