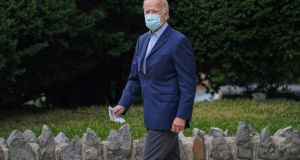 Facebook and Twitter took steps on Wednesday to limit the spread of a controversial New York Post article critical of Joe Biden, sparking outrage among conservatives and stoking debate over how social media platforms should tackle misinformation ahead of the US election.

In an unprecedented step against a major news publication, Twitter blocked users from posting links to the Post story or photographs from the unconfirmed report.

Users attempting to share the story were shown a notice saying: “We can’t complete this request because this link has been identified by Twitter or our partners as being potentially harmful.” Users clicking or retweeting a link already posted to Twitter are shown a warning the “link may be unsafe”.

Twitter said it was limiting the article’s spread due to questions about “the origins of the materials” included in the article, which contained material supposedly pulled from a computer that had been left by Hunter Biden at a Delaware computer repair shop in April 2019. Twitter policies prohibit “directly distribut[ing] content obtained through hacking that contains private information”.

The company further explained the decision in a series of tweets on Wednesday, saying some of the images in the article contained personal and private information. Twitter’s policy against posting hacked material was established in 2018. Twitter chief executive Jack Dorsey said the company’s communication about the decision to limit the article’s spread was “not great”, saying the team should have shared more context publicly.

Facebook, meanwhile, placed restrictions on linking to the article, saying there were questions about its validity. “This is part of our standard process to reduce the spread of misinformation,” said a Facebook spokesman, Andy Stone.

The move is the first time Twitter has directly limited the spread of information from a news website, as it continues to implement stricter rules around misinformation ahead of the 2020 US elections. On Wednesday evening Twitter also reportedly locked the personal account of the White House press secretary Kayleigh McEnany for sharing the article.

In recent weeks Twitter announced it would warn users who attempt to retweet a link without first clicking on it for more context. It has also started to take action against misinformation and calls to violence posted by Donald Trump and other public figures.

Congratulations to the @nypost for having exposed the massive corruption surrounding Sleepy Joe Biden and our Country. He’s always been a corrupt politician. Disgraceful!

Our communication around our actions on the @nypost article was not great. And blocking URL sharing via tweet or DM with zero context as to why we’re blocking: unacceptable. https://t.co/v55vDVVlgt

Censorship should be condemned!

NOT the American way‼️ 🇺🇸

Wednesday’s actions around the New York Post article drew swift backlash from figures on the political right, who accused Facebook and Twitter of protecting Mr Biden, who is leading Mr Trump in national polls.

The New York Post blasted the companies, saying they were trying to help Mr Biden’s election campaign and falsely claiming no one had disputed the story’s veracity. “Facebook and Twitter are not media platforms. They’re propaganda machines,” it wrote in an editorial.

The Republican senator Ted Cruz wrote a letter to Mr Dorsey, saying: “Twitter’s censorship of this story is quite hypocritical, given its willingness to allow users to share less-well-sourced reporting critical of other candidates.”

Mr Trump tweeted it was “terrible” that the social media companies “took down” the article – in fact, it was restricted, not removed – and renewed his calls to “repeal section 230”, a measure that keeps website hosts from being held responsible for content posted. Ironically, repealing section 230 would require Twitter to take down more content, including many of Mr Trump’s tweets.

Even non-conservatives criticised the choice to limit the spread of the article as one that would play into the right-wing narrative that big tech firms censor conservative views. The decision was indeed quickly politicised – with House of Representatives Republicans publishing the text of the story on their website in order to share the link without censorship.

The article implicates the former vice-president in connection with his son Hunter’s Ukraine business and was headlined: “Smoking-gun email reveals how Hunter Biden introduced Ukrainian businessman to VP dad.”

The unnamed owner of the computer repair shop told the newspaper he passed a copy of the hard drive on the seemingly abandoned computer to Rudy Giuliani, Mr Trump’s personal lawyer.

The story focused on one email from April 2015, in which a Burisma board adviser thanked Hunter for inviting him to a Washington meeting with his father. But there was no indication of when the meeting was scheduled or whether it ever happened.

“Investigations by the press, during impeachment, and even by two Republican-led Senate committees whose work was decried as ‘not legitimate’ and political by a GOP colleague, have all reached the same conclusion: that Joe Biden carried out official US policy toward Ukraine and engaged in no wrongdoing,” said Andrew Bates, a spokesman for the Biden campaign. “Trump administration officials have attested to these facts under oath.”

The campaign said it was not told by Facebook or Twitter that any action would be taken regarding the article.

“We have reviewed Joe Biden’s official schedules from the time and no meeting, as alleged by the New York Post, ever took place,” the Biden campaign added.

Others cast also doubt on the report, citing Mr Giuliani’s record of producing disinformation and making bogus claims about both Bidens and Ukraine. – Guardian/AFP