Coronavirus: Young people may not get vaccine until 2022, says WHO 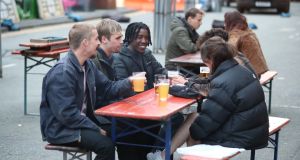 Young people having a drink out in Manchester, England. Young people may not go get vaccine until 2022. Photograph: Danny Lawson/PA Wire

Healthy, young people may have to wait until 2022 to be vaccinated against coronavirus, according to the World Health Organisation’s chief scientist, who says health workers and those at highest risks be prioritised.

It comes as Germany recorded its highest daily number of infections since the start of the pandemic.

Ms Soumya Swaminathan indicated that, despite the many vaccine trials being undertaken, speedy, mass shots were unlikely, and organising who would given access first in the event of a safe vaccine being discovered was still being worked on.

“Most people agree, it’s starting with healthcare workers, and frontline workers, but even there, you need to define which of them are at highest risk, and then the elderly, and so on,” Ms Swaminathan said.

“There will be a lot of guidance coming out, but I think an average person, a healthy young person might have to wait until 2022 to get a vaccine,” she said.

Ms Swaminathan hoped there would be at least one effective vaccine by 2021 but it would be available only in “limited quantities”.

Ms Swaminathan also warned against complacency about the virus death rate, saying with the increasing number of cases, mortality would also rise. “Mortality increases always lag behind increasing cases by a couple of weeks,” she said. “We shouldn’t be complacent that death rates are coming down.”

Two vaccine candidates, from Johnson & Johnson and AstraZeneca’s US trial, have been paused on safety concerns.

The pause is at least the second to occur among several vaccines that have reached large-scale final tests in the US.

Johnson & Johnson says it is pausing its trials of a Covid-19 vaccine while the company investigates a study participant’s “unexplained illness”.

In a statement on Thursday morning, the pharmaceutical giant said an independent committee overseeing the trial would review and evaluate the individual’s illness.

The company declined to reveal any more details about the illness, citing the participant’s privacy.

Germany has recorded its highest number of daily infections since the start of the pandemic, reporting 6,638 new cases. The previous high came on March 28th, with 6,294 cases.

Global infections stand at 38.4 million, with deaths at 1.09 million. The US leads on both counts, with just under 8 million infections and more than 216,000 deaths. – Guardian/PA