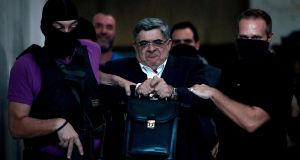 The leader of ultra-right wing Golden Dawn party Nikos Michaloliakos is escorted by masked police officers to the prosecutor from the police headquarters in Athens in 2013. File photograph: Angelos Tzortzinis/AFP via Getty

The neo-Nazi leaders of Golden Dawn have been sentenced to 13 years in prison by a court in Athens, at the end of a historic hearing likened to the Nuremberg trials after the second World War.

The violent Greek neo-fascist group was officially laid to rest as its disgraced former MPs were shown almost no remorse by a three-member panel of judges.

Presiding judge Maria Lepenioti read out the sentences less than a week after the court’s landmark ruling that Golden Dawn lawmakers had operated a criminal organisation under the guise of being a democratically elected party.

On Tuesday, a public prosecutor proposed lengthy prison terms for 57 of the original 68 defendants convicted of murder, assault, weapons possession and either running or participating in the criminal gang.

The court, which dismissed pleas for leniency in all but four cases, went into recess following the announcement to deliberate on whether the sentences would be suspended pending appeal.

Under Greece’s penal code, revised by the former leftist government of the prime minister, Alexis Tsipras, the maximum prison sentence for the crime of heading a criminal organisation is 15 years.

Thanasis Kampagiannis, a lawyer who represented four Egyptian fishermen brutally attacked by the fascist group, described the suspensions as being “critical for the vindication of the victims” and how the trial will ultimately be assessed.

But with anti-terrorist squads poised to round up Golden Dawn’s founder, Nikolaos Michaloliakos, and six of his top lieutenants, observers believe it is only a matter of time before the party’s core leadership is jailed.

If, as is likely, that does happen, at 62 Michaloliakos will spend the next 13 years behind bars, for not only masterminding the organisation’s criminal activities as its self-appointed führer but for turning what was once a fringe Nazi movement into a political force whose modus operandi was the brutal eradication of enemies by Golden Dawn hit squads.

Leftists, anti-nationalist traitors, communist trade unionists, members of the LGBTQ community, migrants and refugees were all targeted by the far-right group from its inception in the early 1980s through to 2012 when, riding a wave of economic anger and despair, it began its seven-year stint in parliament.

The admission of a senior party operative, Giorgos Roupakias, that he had fatally stabbed Pavlos Fyssas, a popular anti-fascist hip-hop artist, triggered the group’s unravelling with the then conservative-led government finally setting the wheels of Greek justice in motion.

Roupakias, the only gang member to receive a life sentence on Wednesday, faces an additional 18 years in prison and a €4,000 fine.

Despite incriminating speeches, videos and Nazi paraphernalia found in his own home, Michaloliakos, a Holocaust denier and die-hard Hitler apologist, has steadfastly refused to own up to any of the crimes. The ultra-nationalist party, he claims, has been the victim of political persecution, hounded for its ideology rather than its actions.

“We were condemned for our ideas,” he tweeted last week before his account was suspended. “When illegal immigrants are the majority in Greece, when [the government] hands over everything to Turkey, when millions of Greeks are unemployed on the street, they will remember Golden Dawn.”

MPs found guilty of co-ordinating the violent activities in suburbs far and wide were also handed sentences ranging from five to eight years.

The deputies included Michaloliakos’s wife, Eleni Zaroulia, who in one address before parliament infamously described immigrants as being “subhuman”.

Ilias Kasidiaris, who has broken away to form his own far-right party since Golden Dawn’s failure last year to be elected to the 300-seat house, was handed a 13-year prison term as a top-tier member of the inner circle around Michaloliakos.

The former commando, who gained notoriety by slapping a communist female MP on TV, was caught on camera openly bragging that parliamentary representation had allowed the group to “exploit certain privileges like having a licence to a gun”.

Greek politicians across the spectrum have unanimously rejoiced in the court’s rulings.

The sentences not only open the way to the unrepentant Nazis spending years in prison, but seal the fate of a political force that has fast dissolved amid defections and factional infighting since its ejection from parliament.

But the marathon 5½-year trial has also illuminated the extraordinary leniency shown towards the Nazi sympathisers by the Greek state.

In a country that suffered so badly at the hands of occupying Nazi troops, many accept it has taken far too long to acknowledge crimes that were all too apparent long before Greece’s political class finally took action.

A police report leaked last week revealed that as many as 16 far-right groups are vying to fill the vacuum left by Golden Dawn. Among them is Greek Solution, a nationalist party led by Kyriakos Velopoulos, an ardent admirer of Hungary’s prime minister, Viktor Orbán, which has 10 MPs in the Athens parliament as of July 2019. – Guardian