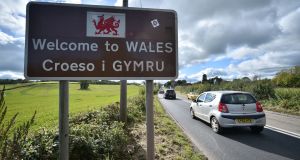 A welcome to Wales sign near Llangua in Monmouthshire, south-east Wales. Visitors from parts of England may be banned. Photograph: Ben Birchall/PA

Wales is planning to ban visitors from parts of England with high rates of coronavirus as Boris Johnson came under pressure to introduce a “circuit breaker” lockdown lasting two or three weeks.

Welsh first minister Mark Drakeford said he was determined to stop people from high-risk areas of England from bringing the virus into Wales.

“Evidence from public health professionals suggests coronavirus is moving from east to west across the UK and across Wales. As a general rule, it is concentrating in urban areas and then spreading to more sparsely populated areas as a result of people travelling,” he said.

“Much of Wales is now subject to local restriction measures because levels of the virus have risen and people living in those areas are not able to travel beyond their county boundary without a reasonable excuse. This is designed to prevent the spread of infection within Wales and to other areas of the UK.”

Welsh police said they would not establish road blocks or checkpoints along the border with England but would instead rely on tip-offs from members of the public about people crossing the border. Liverpool, which is 152km from the Welsh border, on Wednesday entered the highest level of lockdown under Mr Johnson’s three-tier system.

“I can’t see us lining the border with patrol cars because none of the police forces in Wales have the resources to do that. But we will do our best, along with our partners in local authorities and health to enforce the regulations,” North Wales police commissioner Arfon Jones said.

In the House of Commons on Wednesday, Labour leader Keir Starmer renewed his call for a circuit breaker lockdown, which the government’s scientific advisory group recommended last month. The prime minister defended the system of regional lockdowns introduced this week but left the door open to introducing a temporary national lockdown.

Most of England is in the lowest tier of restrictions, under which gatherings are limited to six people and bars and restaurants must close at 10pm. Liverpool is the only place in the highest tier but large parts of the midlands and the north of England are in an intermediate tier, with separate households forbidden from mixing.

Scotland’s first minister warned Scots against travelling to the north of England seaside resort of Blackpool after 180 people from Scotland tested positive for coronavirus after visiting there.

Ms Sturgeon’s handling of the pandemic has boosted her popularity and an Ipsos-MORI poll on Wednesday showed support for Scottish independence at record levels.

The poll found that 58 per cent of Scots now want the country to be independent, with 42 per cent opposed.