Russian troll farm ploughs on even after activities exposed 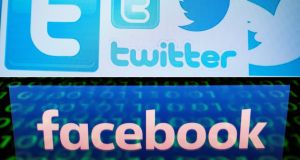 The US says the St Petersburg-based Internet Research Agency has used social media to spread disinformation about US elections. Photographs: Nicolas Asfouri and Lionel Bonaventure/AFP via Getty Images

After the FBI tipped off Facebook that the obscure leftwing website Peace Data was a clandestine front for Russia this week, the site’s anonymous administrators responded the only way a troll knows how: by brazenly posting through the scandal.

“We’re assured that Peace Data became a victim of a collaborated provocative effort from Facebook and FBI who want to shut up independent leftwing voices prior to the presidential elections and to disguise it with the fight against made up Russian threat,” the trolls wrote in a lengthy post riddled with grammatical mistakes and clunky Russian syntax.

Researchers say Peace Data, a small group of about a dozen accounts that hired unwitting American freelancers, is the first known attempt this year by people linked to the Internet Research Agency, the infamous St Petersburg troll farm, to meddle in the 2020 US election.

The US says the agency is funded by Evgeny Prigozhin, a caterer-turned-warlord known as “Putin’s chef”, and indicted 13 of its employees for their attempts to interfere in the 2016 election.

In a roundtable discussion with all 13 defendants last month published on one of his many websites, Prigozhin claimed that the IRA did not exist. “This is all falsifications by foreign secret services after Hillary Clinton’s shameful defeat,” he said. “Now there are new elections in the US ... so they are hyping up the interference story again.”

Peace Data’s name was evidently created with a nod and a wink for its Russian bosses: in Russian, it sounds like pizdato, the obscenity for “f**king amazing” in the mat swearing language.

“Only Prigozhin would think that this influence campaign is f***** great; any reasonable observer would conclude that this is f***** insane,” tweeted Sergei Radchenko, a professor of international relations at Cardiff university.

One of many government-linked troll farms in Russia, the IRA began as an effort to stifle domestic dissent before targeting the US as part of what Washington says eventually became a multi-faceted campaign to boost then-candidate Donald Trump in the 2016 election.

The polarised environment in the US was fertile ground for the agency, whose knowledge of US politics was initially so poor that its employees learned what swing states were only a few months before the election, according to the US indictment.

“Russia doesn’t really need to create a lot of content in this situation to drive the division that it seeks to drive. It really just needs to amplify the existing discord in the United States, ” said Nina Jankowicz, a fellow at the Wilson Center, author of a recent book about Russian disinformation.

The seemingly broad online assault by disparate actors – which ranged from state-sponsored hacking to an IRA meme of Jesus arm-wrestling Satan – indicates a lack of central direction from the Kremlin, according to Sergey Sanovich, a scholar at the Center for Information Technology Policy at Princeton University.

“There is certainly a supply side there in the sense that these people are competing for money, often good money from black budgets,” Sanovich said. “Friends of the presidential administration compete to get the contract and show the goods – what was the reach,” based on incomplete engagement figures that Facebook does not make fully available to researchers.

Run by people previously associated with the IRA, Peace Data mirrored its efforts from the US 2016 presidential election, seeking to “steer potential Democratic voters away from the Democratic candidate”, according to Ben Nimmo, director of investigations at research group Graphika.

In particular, the operatives posted in certain Facebook groups hosting users that might be swayed against Joe Biden, such as democratic socialist groups, in the same way the 2016 campaign aimed to suppress the vote for Hillary Clinton.

“The content is very typical for Russian information operations abroad,” Sanovich said. “US imperialism, discontent with capitalism, even things that follow Russian foreign policy doctrine,” such as articles accusing the Belarus opposition of being western puppets. “They used to run it in print, now they run it online.”

The unmasking of Peace Data has reopened longstanding divisions in the US over whether Kremlin interference helped Trump become president.

“On the right, people deny any election interference happened in the first place,” said Thomas Rid, a professor at Johns Hopkins University and author of a recent history of disinformation. “On the left, people want to believe they basically installed Trump. Both are exaggerations and have become part of the polarised narrative in the US. People are just scared that something like 2016 could be repeated.”

But the paucity of data available from social media platforms makes it difficult to determine whether the IRA’s activity had a significant effect on voters.

Despite using sophisticated efforts to cover its tracks, such as using AI-generated photographs for the site’s fake editors and tricking unsuspecting Americans into contributing articles, Peace Data existed for only a few months before it was discovered.

Its posts only achieved “single-digit engagement figures” bar a few that “gathered thousands each in what appears to have been an attempt at false amplification”, according to Graphika.

Rid said the IRA’s “effectiveness was massively blown out of proportion in 2016 and 2017, so that created a market and expectations for them in 2020 – to deliver success again”.

Getting discovered does not necessarily mean the IRA has lost, however.

During the 2018 midterm elections, the group took advantage of being caught by Facebook to sow chaos during those polls, according to Nathaniel Gleicher, Facebook’s head of cyber security policy.

“[We saw] attempts to co-opt the narrative of widespread Russian interference ... to create division and now more importantly undermine faith in the system,” he said. – Copyright The Financial Times Limited 2020