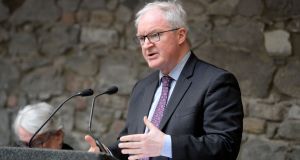 Sir Declan Morgan Lord Chief Justice of Northern Ireland said the British government’s comments about the Northern Ireland protocol enable ‘others to take the view that they can choose which laws apply to them’. Photograph: Alan Betson

The UK government’s plans to breach aspects of the EU withdrawal agreement could undermine the rule of law domestically , Lord Chief Justice of Northern Ireland Sir Declan Morgan has said.

Mr Morgan, who was speaking to The View on BBC One in an interview to be aired on Thursday, said the stance of the British government was both “disappointing” and made him “gravely uncomfortable”.

“It enables others to take the view that they can choose which laws apply to them,” he said. “We need to have a public which is confident that the law will be applied as it is and that it will be applied with integrity and independence.

“Domestic law is what it is, but international law is much more grounded in trust and confidence between nations, and where there is an indication that a state intends to break international law, it seems to me that it may have a domestic effect on the confidence the public has in the legal system generally.”

Meanwhile, SDLP leader Colum Eastwood warned that the UK’s Internal Market Bill is a “significant breach of international obligations” which will turn the UK into a “pariah state”.

Mr Eastwood said the proposed legislation represented a “severe abdication of the clear obligations” that the British government “freely undertook less than a year ago.

“It is not simply a ‘limited and specific’ breach of international law but offers sweeping unilateral powers of interpretation that fundamentally and fatally undermine not just the [Northern] Ireland protocol but any trust between negotiating parties,” he said.

It left the future of Northern Ireland, he said, “in the hands of ministers who have demonstrated consistently that they do not have our interests at heart”.

The UK Internal Market Bill, which was introduced by the UK government on Wednesday, gives British ministers the power to decide unilaterally how parts of the Northern Ireland protocol should be implemented and disapplies parts of the Brexit withdrawal agreement the UK prime minister negotiated with the EU last year.

The statement by Northern Secretary Brandon Lewis in the House of Commons on Tuesday that he expected the legislation would break international law “in a very specific and limited way” had already drawn strong condemnation from the pro-Remain parties in the North and other bodies including civil liberties organisations.

However, the DUP, which had previously given a cautious welcome to the Bill ahead of its publication, on Wednesday described it as a “step forward” for Northern Ireland, but said serious issues still needed to be addressed.

The DUP is opposed to the withdrawal agreement and the Northern Ireland protocol because it effectively places a border in the Irish Sea.

The East Antrim MP, Sammy Wilson, welcomed the legislation as “a step forward and a recognition by the government of the defects of the Northern Ireland protocol and its potential impact on the internal market of the whole of the United Kingdom.

“We will take time to fully consider the effects of the Bill but there is still more work to be done with regards to state aid and other issues,” he said, adding that the party was “focused on ensuring consumer choice and costs are not impeded as a result of the Northern Ireland protocol”.

However, Ulster Unionist Party leader Steve Aiken said the Bill provided little comfort “for those of us who consider the EU withdrawal agreement an awful document which attacks the foundations of the Belfast Agreement, undermines the integrity of the United Kingdom and leaves us in economic limbo.

“Northern Ireland businesses and consumers deserve a level playing field with the rest of the United Kingdom and what has been presented does nothing to address the very fundamental issue of the importance of the continued free movement of goods within our own country from Great Britain to Northern Ireland,” he said.

Sinn Féin MP Chris Hazzard said any attempt by the UK government “to renege on what has already been negotiated and agreed through the Irish protocol would be an indefensible act of bad faith”.

He welcomed the intervention by the US congressman Richard Neal, and said the British government must listen to warnings from him and House Speaker Nancy Pelosi, that the US Congress would not support any post-Brexit trade deal if the Belfast Agreement was undermined.

“This is an issue that unites Democrats and Republicans, with the congress earlier this year unanimously voting to protect the Good Friday Agreement and prevent the imposition of a hard border in Ireland. The British government must take heed of that,” he said.