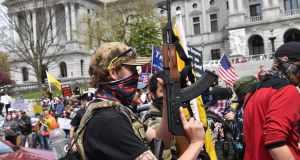 Governors pushed back against assertions by president Donald Trump that the US has sufficient testing capacity in place to begin easing coronavirus restrictions, as the death toll in the country passed 40,000.

Mr Trump has defended his administration’s provision of testing materials, announcing that he would use the Defense Production Act to compel an unnamed company to produce more than 20 million swabs a month.

“You’ll have so many swabs you won’t know what to do with them,” he said at Sunday’s White House coronavirus briefing, as he displayed a swab used for coronavirus testing. Mr Trump has said that America has “the most expansive testing system anywhere in the world”, while White House coronavirus task force co-ordinator Deborah Birx suggested at the weekend that the number of tests actually being completed has been underreported.

But governors from several states said they still had insufficient tests to ascertain whether they could begin easing restrictions. “We have been asked as governors to fight that war without the supplies we need,” Virginia’s Democratic governor Ralph Northam said, arguing it was the role of the federal government to approve and supply testing.

Maryland’s Republican governor Larry Hogan, who strongly hit back at the Trump administration’s claims that there is sufficient testing, announced on Monday that the state had secured 500,000 test kits from South Korea.

The calls from states for more tests comes as the New York Times reported that many tests being used across the country were inadequate and inaccurate. The Food and Drug Administration (FDA) has swiftly approved the use of new antibody tests, many developed in China. But while approximately 90 companies are selling tests, many of these may be flawed, according to the report.

The debate about testing came as protests against coronavirus-related lockdowns took place again on Monday.

In Pennsylvania, thousands of protesters gathered outside the statehouse in Harrisburg to call for social distancing measures to be lifted. It followed similar demonstrations in Texas, Michigan, Virginia and elsewhere. As with previous rallies, many of the protesters were not wearing masks or practising social distancing.

Asked about the protesters at Sunday’s White House briefing, Mr Trump replied: “These are great people. They’ve got cabin fever and they want their lives back . . . They love our country and want to get back to work,” adding that he had never seen so many American flags “all over the place.”

Mr Trump was criticised for apparently encouraging protests in Michigan, Minnesota and Virginia last week, a day after declaring it was the responsibility of each individual governor to decide when to lift coronavirus-related restrictions. While the federal government has issued a “three phase” plan to reopen the economy, only states can decide whether they meet the criteria to start reopening.

In a sign that the peak of the epidemic may have passed, New York reported a lower number of deaths for the sixth consecutive day. A further 478 deaths were announced on Monday – the lowest number of daily deaths since April 2nd. “The question is, how long is the descent, and how steep is the descent?” the state governor Andrew Cuomo said at his daily briefing.

On Capitol Hill, Democrats and Republicans were close to agreeing more than $400 billion (€368 billion) worth of extra funding for the small business loan programme, which ran out of money last week as the economic toll from coronavirus was felt across the country. A vote is expected to take place in the Senate on Tuesday.

The move to support small businesses occurred as oil price futures slipped into negative territory for the first time in history on Monday, amid a huge over-supply of oil in global markets as demand has slipped due to coronavirus.