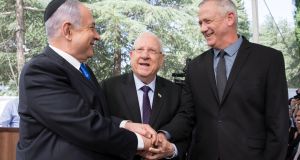 Israeli prime minister Binyamin Netanyahu and his centrist election rival Benny Gantz signed an agreement on Monday to form an emergency coalition government that would end a year of political deadlock.

Mr Netanyahu’s right-wing Likud and Mr Gantz’s Blue and White party issued a joint statement saying they had clinched a unity deal, which follows elections in April and September 2019 and on March 2nd in which neither won a governing majority in parliament.

Official details of the powersharing deal were not immediately disclosed, but a source in Blue and White said the two had agreed Mr Netanyahu would remain prime minister for a set period until Mr Gantz took over in October 2021.

Until then, Mr Gantz, a former armed forces chief, will serve as defence minister and several of his political allies, including two members of Israel’s Labour Party, will receive ministerial portfolios.

During the negotiations the parties cited a number of sticking points, including the planned annexation of Israeli settlements in the occupied West Bank where Palestinians seek a state, and setting a nomination process for judges.

Mr Netanyahu, in power consecutively for the past 11 years, is under criminal indictment on corruption charges which he denies. They include bribery, fraud and breach of trust.

Mr Gantz on the campaign trail promised not to sit in a government led by a prime minister facing criminal charges, but he recently backtracked, saying the enormity of the coronavirus crisis necessitated an emergency unity government.

“We have prevented a fourth election. We will protect democracy. We will fight coronavirus and care for all Israel’s citizens,” Mr Gantz said on Twitter after signing the deal. Mr Netanyahu tweeted a picture of Israel’s blue and white flag. – Reuters