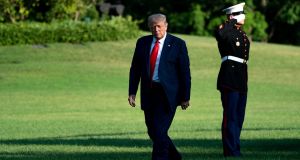 US president Donald Trump has announced final plans to expedite permitting for infrastructure like oil pipelines and road expansions, a move that critics say will sidestep the need for public input, especially from low-income and minority communities.

The proposal to change how the 50-year-old bedrock National Environmental Policy Act (Nepa) is implemented is part of Mr Trump’s broader campaign to curtail environmental regulations.

The final rule says that federal agencies need not factor in the “cumulative impacts” of a project, which could include its impact on climate change and have significant and long-lasting consequences.

“Today’s action is part of my administration’s fierce commitment to slashing the web of needless bureaucracy that is holding back our citizens,” Mr Trump said in a speech at the UPS Hapeville Airport Hub in Atlanta.

He said one major project that will get an expedited review is the I-7five lane expansion project from Atlanta to Macon, Georgia.

Mr Trump’s efforts have often been blocked or slowed down by the courts after lawsuits.

Last week, a federal judge ordered the Dakota Access pipeline to shut down because the US Army Corps of Engineers had failed to do an adequate Nepa impact study, and the Supreme Court blocked construction of the Keystone XL line from Canada pending a deeper environmental review.

The White House Council on Environmental Quality (CEQ) proposed the changes to Nepa in January, kicking off a public comment period. Officials had called the proposal “the most significant deregulatory proposal” of the Trump administration.

“This change means that reviews of big federal projects will ignore massive problems like climate change, even as some of our most important financial institutions warn of the threat it poses,” said Democratic senator Sheldon Whitehouse, a member of the Senate environment committee.

Energy and other industry groups applauded the changes.