Twitter accounts of Biden, Obama and other prominent figures hacked

High-profile accounts, including those of Elon Musk and Kanye West, hacked as part of a widespread Bitcoin scam 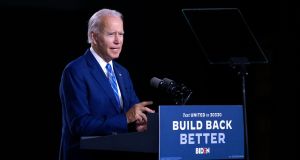 The Twitter accounts of some of the US’s most prominent political and business leaders, from Barack Obama and Joe Biden to Bill Gates and Warren Buffett, were hacked on Wednesday afternoon in an apparent effort to promote a Bitcoin scam.

The accounts sent out tweets promising to double the money of anyone sending funds via Bitcoin within 30 minutes.

Twitter said it is aware of the security incident impacting its accounts and is investigating. As the hack was unfolding, verified Twitter accounts suddenly lost the ability to post new tweets.

The company’s shares declined more than 3 per cent in extended trading.

So far, the Bitcoin address tweeted by the hackers has been sent over 12 Bitcoins, worth more than $110,000 (€97,000). It appeared popular Bitcoin exchange Coinbase has blocked its users from sending money to the address.

Some of the Twitter accounts that were targeted said they used two-factor authentication and strong passwords. The tweets indicate they were posted using Twitter’s web application.

According to TrendsMap.com, the phrase “I am giving back to my community due to COVID-19” has been tweeted 3,330 times in the past four hours. A heat map shows activity centered in Houston but scattered across the globe, including tweets originating from IP addresses in New York, London, Spain, Italy, Jakarta and Tokyo.

Twitter has previously endured high-profile hacks, including one of chief executive officer Jack Dorsey that was administered through a SIM swap – meaning a user found a way to mimic the phone number of the account and tweet via text message. Following the string of incidents, Twitter closed the loophole by suspending the ability to tweet via text. The official Twitter accounts of more than a dozen NFL teams were hacked earlier this year, just ahead of the Super Bowl. – Bloomberg