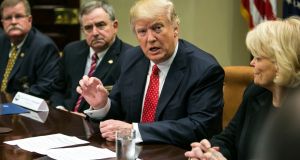 US president Donald Trump: “I don’t ever want to call a court biased, so I won’t call it biased. And we haven’t had a decision yet. But courts seem to be so political.” Photograph: Al Drago/New York Times 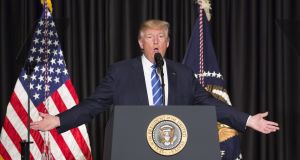 US president Donald Trump launched a blistering attack on critics of his immigration policy on Wednesday, describing the ruling by a Seattle court which temporarily halted his travel ban as “disgraceful”.

As it emerged that the ninth US circuit court of appeals in San Francisco, which received oral arguments from both sides of the debate on Tuesday evening, would not issue a ruling on Wednesday, Mr Trump reiterated his view that the country’s security was at risk, describing the US courts that have challenged his executive order on immigration as “so political”.

“I don’t ever want to call a court biased, so I won’t call it biased. And we haven’t had a decision yet. But courts seem to be so political. And it would be so great for our justice system if they would be able to read the statement and do what’s right,” Mr Trump said at a gathering of police chiefs and county sheriffs in Washington.

“It’s a sad day,” he continued. “I think our security’s at risk today.”

The three-panel court heard oral arguments on Tuesday evening from department of justice officials, questioning Mr Trump’s representatives about the evidence the president had relied on in making his decision to temporarily ban travel from seven countries. The judges – two of whom were appointed by Democratic presidents and one by a Republican – also questioned representatives from the Washington state court about their accusation of religious discrimination on the part of the president.

Mr Trump said he had watched a live stream of the oral hearing on television.

“I watched last night in amazement and I heard things that I couldn’t believe, things that really had nothing to do with what I just read,” he said, referring to sections of immigration law which gave him power to enact the ban, saying that “even a bad high school student” would understand it.

The ruling by a Seattle court last Friday led to the temporary halting of Mr Trump’s executive order of January 27th, effectively granting those eligible to travel to the US from seven countries before the order was issued permission to enter the country.

As criticism continued over Mr Trump’s immigration policy, tensions flared in the Senate, where a number of the president’s cabinet nominees are facing confirmation votes.

Leading Democrats reacted with fury over a decision by Senate Republicans to rebuke democratic senator Elizabeth Warren over a speech opposing the nomination of Jeff Sessions as attorney general.

In a highly unusual move, senate majority leader Mitch McConnell interrupted Ms Warren on Tuesday night as she spoke to inform her she was in breach of Senate rules which prohibit senators from impugning their fellow senators.  “The senator has impugned the motives and conduct of our colleague from Alabama,” Mr McConnell said, referring to Mr Sessions.

Ms Warren had quoted from past statements from the late senator Edward Kennedy and the late Coretta Scott King, wife of the murdered Martin Luther King, who wrote to the Senate judicial committee in 1986, opposing his nomination to be a federal judge.

The senate voted 49 to 43 to uphold the ruling, banning Ms Warren from contributing to further debates on Mr Sessions’s suitability as attorney general.

Ms Warren – whose Tuesday night speech went viral on the internet – accused Republicans of silencing her. “They can shut me up but they can’t change the truth,” the Massachusetts senator told CNN on Wednesday.

Meanwhile the army has given the green light to the completion of the controversial Dakota access pipeline, to the dismay of campaigners and representatives of the Sioux tribe.