Laicised Italian priest went on to abuse up to 10 boys 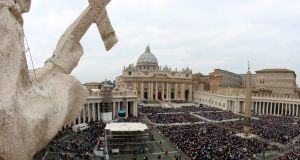 Peter’s Square in Rome: An Italian priest laicised by the Vatican in 2012 for sex abuse crimes may have subsequently abused as many as 10 boys. Photograph: Alessandro Bianchi/Reuters

The Italian Catholic Church has been rocked by revelations that a priest laicised by the Vatican in 2012 for sex abuse crimes may have subsequently abused as many as 10 boys.

It is alleged that civil authorities were not informed of the Canon law conviction against the priest, Gianni Trotta, following his removal from the priesthood. In the absence of any black mark against him, Trotta was allowed to take over the training of an under-11 boys football team in the province of Foggia in Puglia, southern Italy.

Holy See sources say it was the responsibility of Trotta’s diocese in Bari to signal his Canon law conviction to the relevant civil authorities.

The question of mandatory reporting of sex offenders by church authorities has long been controversial. For long, the Holy See has claimed that Vatican “confidentiality” with regard to cases heard by the Congregation for the Doctrine of the Faith did not mean a ban on reporting serious accusations to civil authorities.

The US bishops’ norms on sexual abuse, for example, revised and approved by the Vatican in 2002, state: “The diocese will comply with all applicable civil laws with respect to the reporting of allegations of sexual abuse of minors to civil authorities and will co-operate in their investigation.”

Local churches worldwide have interpreted the mandatory reporting issue in different ways, depending both on local mores and the church’s relations with the particular country’s government.

In the case of Italy, the Italian bishops’ conference presented its first ever sex abuse norms for the protection of minors in 2014, a decade and more after similar documents had been prepared by other European conferences. The document urged co-operation with civil authorities but argued that bishops had no legal obligation to report abuse allegations to the police or other civil authorities.

Another ironic aspect of the Trotta case is that, once an abuser priest is laicised, the Catholic Church has de facto lost control of and power over him.

The state investigation into Trotta began almost by chance. Bari-based investigating magistrate Simona Filoni received a complaint from the parents of an 11-year-old girl who said that their daughter had been in online contact with a man who kept asking her to send him naked photographs of herself.

When the magistrate looked into the identity of the girl’s online correspondent, she quickly discovered that he was Trotta, who was already under investigation by two of her public prosecutor’s offices.

A search of the attic in the home of the ex-priest’s 90-year-old mother revealed a horde of child pornographic material. Investigators believe Trotta abused the trust of his small village near Foggia, continuing to present himself as a priest, long after his laicisation.