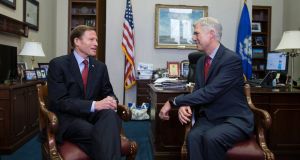 US supreme court nominee Neil Gorsuch told a Democratic senator he found Donald Trump’s comments “disheartening” and “demoralising” when the president criticised the judiciary over a federal court order that blocked his immigration ban.

Ron Bonjean, a spokesman aiding Mr Gorsuch in the confirmation process, confirmed Mr Blumenthal’s account of their conversation in an email and said the judge “used the words disheartening and demoralising”.

“He certainly expressed to me that he is disheartened by demoralising, abhorrent comments made by President Trump about the judiciary,” Mr Blumenthal said outside his senate office. “But I will be asking for more specific and forthcoming comments to those kinds of questions before I determine how I will vote.”

On Saturday, Mr Trump criticised a federal judge who blocked his travel ban as a “so-called judge”. On Wednesday, the president argued that his power to limit immigration should not be challenged in courts.

“The courts seem to be so political, and it would be so great for our justice system if they would be able to read a statement and do what’s right, and that has got to do with the security of our country, which is so important,” Mr Trump told a conference of police chiefs and sheriffs in Washington.

Mr Gorsuch’s strong criticism of Mr Trump could help convince sceptical Democrats, angry over the president’s reaction to the travel-ban ruling, to give the judge more serious consideration.

The exchange between Mr Gorsuch and Mr Blumenthal, who serves on the judiciary panel that will hold the judge’s confirmation hearing, comes after demands from senate Democrats that Mr Gorsuch demonstrate his willingness to be an independent jurist and a check on potential abuses of power from the executive branch.

Mr Trump “has questioned the credibility of a Republican-appointed judge who dared rule against his legally dubious executive order and he has tested the bounds of our constitution in the first days of his presidency like no other occupant of this office”, senate minority leader Chuck Schumer said on Tuesday of Mr Trump’s reaction.

He added that “the bar for a supreme court nominee to prove they can be independent has never never been higher”.

Mr Gorsuch (49) was nominated to replace the late justice Antonin Scalia. An appellate court judge, he is holding one-on-one meetings with senators of both parties as he works to gain enough support to win confirmation to the high court.

One early poll shows a plurality of Americans say the senate should confirm Mr Gorsuch.

Forty-nine percent of adult Americans in a January 31st-February 2nd CNN/ORC poll said he should be confirmed, about the same level of support for Samuel Alito in 2005 and Sonia Sotomayor in 2009 soon after they were nominated.

Judge Merrick Garland, former president Barack Obama’s choice, who was blocked by senate Republicans, received 52 percent support in a poll after he was nominated.

Of Republicans, 84 per cent back Mr Gorsuch while 61 per cent of Democrats are opposed.

1 Woman stranded in Ireland due to pandemic has ‘miracle baby’
2 ‘Difficult months ahead’: Europe prepares for more pain as Covid cases soar
3 Two hundred Irish retailers for all your online Christmas shopping
4 Covid-19: Critical cases from NI could put pressure on services in Republic
5 Covid-19: Public urged to ‘stay at home’ as 1,025 further cases confirmed in State
Real news has value SUBSCRIBE