Tensions rise as the president talks tough: ‘It suddenly feels as if we are on a sinking ship’ 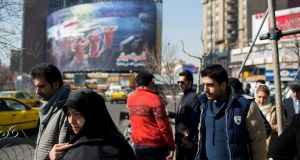 Valiasr Square in Tehran, with a huge mural of captured US navy sailors in the background. Gloom and even dread can be felt across the city, where some blame not only the Trump administration but also their own leaders for the possibility of a violent conflict between Iran and the US. Photograph: Arash Khamooshi/The New York Times 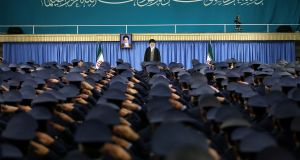 It was supposed to be a regular weekly debate night for a group that meets to discuss movies in a middle-class Tehran neighbourhood. But on this particular evening, the 20 or so housewives, intellectuals and students in the group wanted to talk about only one thing: a possibly violent conflict between Iran and the United States.

Months had passed since members of the group had been so worked up, recalled one of the participants, Fariba Sameni (57), a translator. No one wanted to discuss films. Younger members were convinced that new president Donald Trump will inevitably bomb Iran. “They shouted that their futures would be destroyed,” Sameni says.

The group’s leader, a professor, argued that Trump, with his background as a businessman, would ultimately make a deal with Iran. The professor’s argument was unconvincing, Sameni said. “When I went home, I felt anxious and worried, as if something really bad is about to happen.”

Gloom and dread can be felt across the Iranian capital, and some people blame not only Trump but also their own leaders. First Trump ordered a ban on travel by most Iranians to the US. Then the Iranian military conducted a missile test, which was followed by a warning from Trump’s national security adviser that Iran was “on notice” for an undefined reprisal.

Amid all of this, Trump issued a barrage of Twitter posts accusing Iran of meddling in the region and being “#1 in terror”. He has also not missed an occasion to call the 2015 nuclear agreement – which many average Iranians see as their main lifeline to relatively normal lives – as a “really, really bad deal”.

In classrooms, taxis, hair salons and homes, many people in this nation of 80 million have gone from first dismissing Trump’s comments as political bombast to worrying about new sanctions and even military strikes by the US. Iran’s supreme leader, Ayatollah Ali Khamenei, has responded to Trump with mocking sarcasm.

“Trump is unpredictable; our leaders are unpredictable,” Sameni said. “It suddenly feels as if we are on a sinking ship.”

When Trump was elected, many Iranian citizens did what they usually do: hope for the best. In recent years, they had become accustomed to feeling as if they were stuck riding a political roller coaster, at the mercy of others. In 2015, when their leaders, to widespread surprise, struck a compromise nuclear deal with the US and other world powers, many Iranians celebrated.

And for most of the past year, life in Iran got a little better. While the economy continued to favour the wealthy, and corruption cases made many people cynical, one thing had changed: There was no more talk of military strikes, or of conflict or war with the United States.

For the first time since 2002, when then president George W Bush called Iran part of the “axis of evil”, a sense of relative normalcy had taken hold of the capital. European investors were flowing in, oil sales were going up, and Iran even signed contracts to buy Airbus and Boeing planes for its aging fleet.

“After the nuclear deal, everything looked up,” said Ali Sabzevari Fasfangari (33), a magazine publisher. “It was far from perfect, but at least improving.”

He said the nuclear agreement had been regarded as a litmus test. The deal, he argued with friends, meant that reconciliation between Iran and the US was possible, even after decades of estrangement. “It seemed it was a pivotal turning point: We were on our way back to becoming a part of the international community.”

That feeling has completely dissipated in the nearly three weeks since Trump’s inauguration.

At a barbershop in west Tehran, the Trump name was the only thing that could get a group of young men to turn away from the soccer match between Tehran’s popular Esteghlal team and a team from Qatar.

“We thought he was a businessman who would offer transactions with Iran, perhaps some investments,” said Ali Mohammadi (26). Describing himself as a fun-loving young man seeking a decent job, Mohammadi said he was now thinking about what he would do if Iran came under bombardment some day. “It just feels as if we are powerless, at the mercy of international politics.”

When Trump ridiculed the nuclear agreement during the presidential campaign, many in Iran thought he was merely trying to get votes. Some middle-class Iranians, who get their news from the some 150 illegal Persian-language satellite channels that broadcast from overseas into Iran, contended that Trump could actually be a blessing.

The US president’s perceived friendliness toward Russia has long been seen as a plus in Iran, with many people expecting Russia president Vladimir Putin to rein in Trump’s anti-Iranian stances.

“But we cannot trust the Russians to do so,” said Housang Tale, a historian who is critical of Russia’s relationship with Iran’s leaders. “They have used us throughout history, taken our land and sold us out. Who said they [Russia] won’t trade Iran with the US for Ukraine? More pressure is coming.”

Others disagree, insisting that Iran’s cordial relations with Russia would save their country from new sanctions and military strikes. “They will not allow America to attack us,” said Malek Elyasi, who owns a motorcycle repair shop. “Any war with Iran would turn into a global conflict because the Russians will support us.”

Iran’s defiance of the US has been a pillar of foreign policy since the 1979 Islamic Revolution, and the ideology of independence from world powers is widely embraced even by Iranians who do not like their government’s politically repressive behaviour. But some question whether this ideology can sometimes undermine national interests.

“How about not test-firing a missile?” Sameni said. “Maybe that would reduce tensions.”

Those close to Iran’s foreign policymakers say there is no other way but to resist what Iran calls hypocrisy and double standards practised by the United States and other big powers. “They say we can’t test-fire missiles, the US says, but India, Russia and Britain can do so without problems,” said Mohammad Marandi, a professor at Tehran University. “We cannot just allow them to dictate to us.”

Trump may just be posturing “to reinforce his negotiating position to get concessions,” Marandi added. “We are not really afraid of him.”