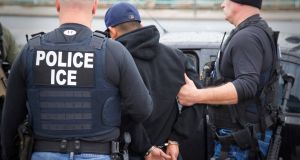 US president Donald Trump has defended the detention of hundreds of immigrants by federal authorities in recent days, describing the action as a fulfilment of his campaign promises.

Advocacy groups reported a sharp increase in the number of raids last week, sparking fears among undocumented immigrants living in the country that they could be deported.

Mr Trump defended the operations, tweeting on Sunday: “The crackdown on illegal criminals is merely the keeping of my campaign promise. Gang members, drug dealers & others are being removed!”

Officers from the Immigration and Customs Enforcement (ICE) agency carried out hundreds of raids last week in at least six states. Authorities said the vast majority had felony convictions, though some had no criminal records.

Among those who were detained were Guadalupe Garcia de Rayos a, 35-year-old mother of two who was deported to Mexico on Thursday after 21 years living in the US . Ms de Rayos, who was convicted in 2008 for using a fake social security number, was arrested when she attended a routine check-in with immigration services in Phoenix, Arizona, on Wednesday. She was deported to Mexico the following morning.

In an apparent reference to the ban suspension, Mr Trump tweeted on Sunday that 72 per cent of refugees who entered the US last week during the “court breakdown” were from the seven countries targeted by the ban – Syria, Iraq, Somalia, Iran, Sudan, Libya and Yemen.

Mr Trump has pledged to bring forward new immigration measures “rapidly”. This could include rewriting the executive order as early as this week. The White House has not yet confirmed if it will refer the case to the Supreme Court. In a series of interviews on Sunday, Stephen Miller, a senior policy adviser to Mr Trump, said that officials were considering all options to reinstate the ban. He said that the seven countries were chosen on the basis of the risk they pose to the US, arguing that the president has the power to decide who comes into the country.

“A district judge in Seattle cannot force the president of the United States to change our laws and our constitution because of their own personal views. The president has the power . . . to suspend the entry of aliens when it’s in the national interest.”

Mr Miller sidestepped questions about reports that national security advisor Mike Flynn discussed sanctions with Russian ambassador Sergey Kislyak before Mr Trump was inaugurated. Former US president Barack Obama imposed sanctions on Russia and expelled Russian diplomats before he left office following allegations that Moscow was behind cyberattacks that may have influenced the US election.

While Mr Flynn originally said he had not discussed sanctions with the ambassador, he later said that he “couldn’t be certain that the topic never came up.”

Mr Trump, who spent the weekend at his Florida resort where he hosted Japanese prime minister Shinzo Abe, is due to meet Canadian prime minister Justin Trudeau on Monday at the White House.

The US and Japanese leaders condemned a ballistic missile test by North Korea on Saturday night, with Mr Trump stating that America “stands behind Japan, its great ally, 100 per cent” and the Japanese premier describing the latest test as “absolutely intolerable”.

The missile test, which was condemned by Nato and the European Union, was the first provocation by North Korea since Mr Trump’s inauguration as president of the United States.