In Trump's lair, everything is gold, except of course Steve Bannon’s sarcophagus 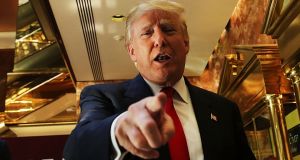 As a journalist seeking ways to “normalise” Donald Trump (our job now), I’d love to contact those who have grappled with this challenge for some time – his hair-pluggist, for example, or his face-straightener, or Piers Morgan, or the witch who makes his humanoid exoskeleton. But, in the absence of such access, I’ll make do with Trump in His Own Words (Tuesday, TV3), an interview programme which first aired on Fox News in the US as OBJECTified.

OBJECTified is hosted by Harvey Levin, a twinkly smile emanating from a crinkly tan, who loves celebrities and likes to talk to them about their lives, in their own homes, with reference to a collection of their “treasured objects”.

This is exciting for Trump watchers. “Treasured objects?” you say. Are we going to see old carapaces that Trump shed during his moulting phases (the 1970s and 1990s); the mummified apprenti he gleaned from the set of his television show; the floor of Trump Tower that’s reputed to be filled with nothing but wiry yellow hair; Trump’s signed copy of the Necronomicon; the other floor of Trump Tower rumoured to feature wall-to-wall paintings of slender-fingered hands; or for fans of politics (Trump is also a politician), Steve Bannon’s sarcophagus, Sean Spicer’s restraints, or the enchanted urn that houses Kellyanne Conway’s soul?

Let’s find out. The programme begins with Levin perched contentedly on/by Trump’s shoulder surrounded by golden desks, golden lamps, golden statues, golden doors and golden lifts. Everything is gold in Trump Tower. Trump, like a creature of folklore, likes to hoard gold. He himself is dressed, as usual, in a sort of floppy suit-smock hybrid and a huge red tie that doubles in times of need as a loincloth.

Trump doesn’t seem to know how arms work and tends to keep them held awkwardly by his side as he manipulates his tiny beak to cycle through the three expressions he can do (“serious business man”, “sad baby” and “sexy ingenue”). He often holds his head cocked to one side, like a Labrador trying to understand people-words.

It doesn’t take Levin long to root out a framed picture of Trump in which he is but a demonic larvae, and he uses this as a prompt to get Trump talking about his father Fred “Cthulhu” Trump, who made a fortune building homes for white people (and others) back in the day. We see a picture of those homes.

We also see a picture of the mansion in which Trump lived off a road called Utopian Parkway. Seriously. That’s actually the name of the exit he used to live near – Utopia Parkway. This is ironic, because of, you know, the dystopia.

Trump’s life in a humble mansion must seem “quaint” now, Levin suggests, as they stand in Trump’s tower of darkness staring out at the decaying empire of which he is god king. Trump agrees. He discusses his boyhood paper run, denies a rumour he did this from a limo, and denies another that he once hit a music teacher.

“I hate that story,” Trump says, presumably because it mentions music and thus human joy, which eludes him.

He’s much more eager talking about military school, which makes him look tough – tough enough to have fought in Vietnam, perhaps. Yet, he didn’t fight in Vietnam. He got deferments due to “bad feet”.

The “treasured objects” from paragraph three are held from view, but here are some of the items we do get to see. There is a letter from former president Richard Nixon, written in the 1980s, suggesting that Trump become president (in an alternative reality where Trump is not president, Nixon presumably did not resign in disgrace). There is a room filled with all the magazines on which Trump has been a cover star.

We also see a nifty little electric Noddy car that Trump insists belongs to his son Barron, but which no court in the land would convict him for driving himself, even if they were simultaneously fighting his bigoted Muslim ban.

Trump says that he would have liked to have worked in film. He loves Sunset Boulevard, the tale of a rich lady who spends her days watching footage of herself and ends up killing a Hollywood liberal. (Trump no doubt views as a comedy with a happy ending.) He says choosing between doing another season of The Apprentice or running for president for the final season of America was a really difficult decision. He says he doesn’t know how his wife is going to take to being first lady. He warns about the dangers of cyberbullying. He looks unhappy.

Among the hard-hitting questions Levin asks Trump is one that amounts to: “How come you’re such an amazing father?” But Trump does not show us the room of bloated egg-sacs through which Donald jnr, Eric, Ivanka, He-Man, Hulk Hogan, Mr Tayto and the rest of his wretched brood gnawed their way shrieking into public life. Instead, the man who inherited a fortune from his father says: “I think it’s important to make children understand the value of the dollar, the value of work, the value of achievement.”

He also has some strict rules: “No drugs. No cigarettes. No alcohol.” Thankfully, these rules are just for his children. I myself have been drunk since November and we now regularly get heroin in the Irish Times office. All of our children smoke.

Finally Levin asks: “Who are you? Who is Donald Trump?” If this was an attempt at a gotcha question, Trump is too clever for him. “Hey, I’m not falling for that,” replies Nazgaroth, Eater of Souls, for I have it on good information that it is He.

Puppies not to the rescue

Something about short-fingered incompetents who have been promoted beyond their capabilities got me thinking of Paw Patrol (Netflix). I have watched a lot of this programme recently, as it is loved by my niece and my nephew.

Well, there’s no nice way of saying this: my nephew and niece don’t know what they’re talking about. They have terrible taste in television.

The problem is the premise, which frankly strains credibility. The idea of outsourcing the emergency services to a child (the manager of this half-baked operation, if you can believe that) and six excitable puppies who have neither the training nor the opposable thumbs to drive vehicles safely is the absolute height of short-sighted, neo-liberal folly.

I certainly hope the privateers and policy makers in Dáil Éireann and Washington are not taking note.