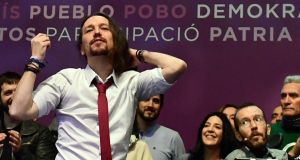 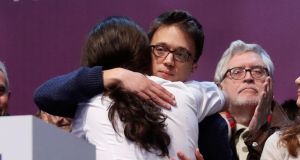 Pablo Iglesias embraces Podemos deputy leader Íñigo Errejón. Mr Iglesias did not mention his deputy leader in his victory speech and many believe he will demote his erstwhile ally in a reshuffle. Photograph: Ballesteros/EPA

Pablo Iglesias, leader of Spain’s Podemos, won a key members’ vote on Sunday, wresting control of a party that had been thrown into chaos by infighting.

Mr Iglesias (38) scored decisive victories in a series of votes on organisational and policy issues, with the results announced at the party’s second national assembly in Madrid. In the most keenly watched ballot – the election of the party’s 62-strong civic council – his allies won 37 seats, against 23 for his main rival, Íñigo Errejón.

The relationship between Mr Iglesias and Mr Errejón (33), who is deputy leader, has soured over the last year, as their respective factions have fought an increasingly fierce – and public – battle over party strategy.

“Today, Podemos is stronger and more mature, so that it can continue being an instrument of the social majority,” Mr Iglesias told several thousand party members who had gathered for the two-day assembly in Vistalegre stadium, after the results were announced.

There was only one formal challenger to his position as party secretary general, the little known Juan Moreno Yagüe, who received 11 per cent of votes and failed, as expected, to have a major impact. With Mr Iglesias’s personnel and proposals dominating the voting, he appears to have tightened his grip on a party he had been in danger of losing control of.

“There is a unanimous mandate for this civic council and for this secretary general,” he said. “Unity and humility until victory.”

Podemos has been the phenomenon of Spanish politics of recent years, rising rapidly on the back of anger at austerity and corruption. Founded by a group of university professors in 2014, the party now backs candidates who govern Madrid, Barcelona and other cities and has become the third-biggest presence in parliament.

Last year it appeared to declare itself an overtly leftist force, teaming up with the communist-led United Left (IU). Mr Errejón was unhappy at the move, believing Podemos should reach out to moderate voters in the centre ground and be more open to forming pacts with other parties. The rift with Mr Iglesias has widened since.

The two men briefly embraced after Sunday’s results were announced, prompting loud chants of “unity” from party members who had become frustrated at how the rivalry dominated the build-up to the event. However, Mr Iglesias did not mention his deputy leader in his victory speech and many believe he will demote his erstwhile ally in a reshuffle.

Although the result strengthens the position of Mr Iglesias, voting showed that about a third of the 155,000 members balloted are unconvinced by his leadership.

“There’s a clear majority but I think there’s also a clear mandate for plurality,” said Mr Errejón after the event.

“I think this has reinforced Pablo Iglesias but it also shows that the party isn’t 100 per cent Pablo Iglesias,” Lucas Bilbao, a party activist from Cádiz, told The Irish Times.

“More than talking about if we’re leftist or not, I’d rather think about us as decent people fighting against indecent people.”