Saudi-led war in Yemen risks plunging half population into famine 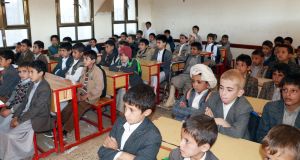 A class that lost pupils in an August 2018 Saudi-led air strike on a school bus in Saada province in Yemen. Photograph: Naif Rahma/Reuters

The presumed murder of Saudi journalist Jamal Khashoggi in the kingdom’s consulate in Istanbul has diverted attention from dire warnings that nearly half of Yemen’s 28 million people face famine due to the Saudi-led war on their country.

UN humanitarian co-ordinator Lise Grande said this week: “We predict that we could be looking at 12-13 million innocent civilians who are at risk of dying from the lack of food.” This could be “the worse famine in the world in 100 years”, she warned.

Yemen’s cities, towns and village have been ravaged by the conflict, thousands of civilians killed by Saudi bombardment, and millions starved and exposed to cholera, polio, diphtheria and other communicable diseases.

Access for humanitarian aid – already limited by a Saudi blockade – has been disrupted by fighting over the Red Sea port of Hodeidah, through which 70 per cent of food and medical aid enters the country.

Rising prices of food and fuel and the collapse of the Yemeni currency have left millions of Yemenis dependent external assistance.

Caoimhe de Barra, chief executive of aid agency Trócaire, has urged the Irish Government to press “all actors to restart the stalled peace process and find a political end to this conflict”. She called the famine “a shocking example of an entirely man-made crisis” .

The Yemeni war was launched in March 2015 by the then 29-year-old overly ambitious Saudi defence minister, Prince Mohammed bin Salman, the king’s favourite son, who believed he would score an early victory. His objective was to oust Shia Houthi rebels from swathes of Yemeni territory and restore Riyadh-backed president Abd Rabbo Mansour Hadi. He had been removed by the Houthis, whom Saudis accuse of being pawns of their chief regional rival Iran.

In June 2017, King Salman, then 81 and ailing, appointed Mohammed crown prince, conferring on him unchecked power.

Recent attacks on buses killing school children and families fleeing fighting as the offensive to capture Hodeidah has intensified are deadly examples of the consequences for Yemen and its people of the crown prince’s reckless policies.

Since he has been able to count on the support of the US, UK, and France, Bin Salman has not taken seriously UN-mediated efforts to achieve an end to the conflict. The leaders of these key allies could use widespread revulsion over the Khashoggi affaire as leverage to force him to halt the Yemen war. So far, the Trump administration has indicated that US pressure will not be applied on the crown prince.

Media outlets around the world have asked why the likely murder of a sole Saudi journalist has attracted worldwide condemnation while the slaughter of thousands of Yemenis has not.

UN and humanitarian organisations have not even counted the number of Yemenis who have died – the cited figure has stuck at 10,000 for more than two years. Nevertheless, the UN blames Saudi air strikes for the majority of deaths from military action. Fatalities have surged during the Hodeidah offensive as famine stalks Yemen, the poorest country in the region.