She had been arrested in an ongoing money laundering investigation 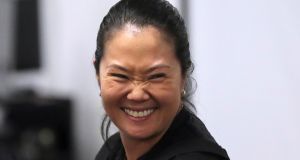 Keiko Fujimori, daughter of former president Alberto Fujimori and leader of the opposition in Peru, is seen in court. Photograph: Mariana Bazo/Reuters

Peru’s opposition leader Keiko Fujimori has been freed by an appeals judge, a week after she was arrested in an ongoing money laundering investigation.

The daughter of former strongman Alberto Fujimori cried as the judge read aloud his ruling on Wednesday night.

Several critics heckled Ms Fujimori as she left the courthouse.

She remains under investigation over undeclared financial contributions of more than €1 million to her 2011 presidential campaign that were allegedly made by Odebrecht, the Brazilian construction firm at the heart of Latin America’s largest-ever corruption scandal.

Ms Fujimori narrowly lost to Pedro Pablo Kuczynski in the 2016 presidential run-off, but her party emerged with a majority of seats in congress.

A different judge recently ordered that the elder Fujimori should be returned to jail to finish a long sentence for human rights abuses. – AP