Taoiseach says any Brexit deal must be acceptable to European Parliament

Speaking on the third day of EU summit meetings in Brussels, Taoiseach Leo Varadkar has said that a longer Brexit transition is not an alternative to a Border backstop, Video: EU Council 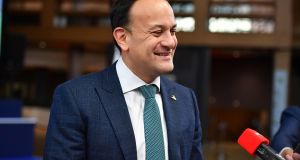 Taoiseach Leo Varadkar said on Friday that a possible extension of Britain’s post-Brexit transition period would not diminish Ireland’s need for a “backstop” to avoid a hard Border.

He also told reporters on the third day of EU summit meetings in Brussels that it would be up to British Prime Minister Theresa May to decide whether she had to defy opposition from the Democratic Unionist Party and agree to the EU’s proposed backstop, which would potentially create trade barriers between Northern Ireland and the rest of the United Kingdom.

He said it was a “judgment call” Mrs May would have to make but said that without an Irish backstop, any withdrawal treaty might not be ratified by the European Parliament.

In March, the UK agreed that the backstop would remain in place in the event of a no-deal Brexit “unless and until” a permanent solution is found to keep the Border open. (read Simon Carswell’s explainer on the Border and the backstop).

European Union leaders have told Mrs May they are willing to extend Britain’s post-Brexit transition if it would help to resolve the impasse over Northern Ireland. Under pressure from within her own party at Westminster, Mrs May played down the proposal to extend the transition period, which is due to end in December 2020. However, she said she was committed to working with the EU to quickly resolve the backstop issue, which was blocking progress towards a Brexit deal.

Mr Varadkar spoke to reporters about the issue in Brussels on Friday. Asked of a possible return to violence in Northern Ireland in the event of no-deal and with the imposition of a hard Border, Mr Varadkar said: “It’s not something that is going to be centre stage in the negotiations because the negotiations are very much about a solution and we’ve got to the point where they become very technical.

“But certainly it’s something that’s in the back of my mind as a potential consequence if we get this wrong.”

He said he was open to the idea of an extension of a transition period during which the UK operates within EU trade rules but added: “That’s not an alternative to a legally binding Irish backstop so it’s certainly not an alternative, it’s just something that might be part of the mix”.

Mr Varadkar is holding a series of bilateral meetings in Brussels today and has has already met the prime minster of Norway Erna Solberg and the deputy prime minister of Malaysia Ms Wan Azizah, while he spoke to Russian prime minister Dimitri Medvedev at dinner on Thursday.