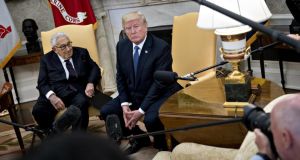 Oval Office: pressed as he met Henry Kissinger about his relationship with Rex Tillerson, Donald Trump said he had confidence in his secretary of state. Photograph: Andrew Harrer/Bloomberg

Donald Trump escalated his feud with senior Republicans on Tuesday, mocking the chairman of the foreign-relations committee on Twitter and challenging his secretary of state, Rex Tillerson, to an IQ test.

Days after Mr Tillerson was reported to have described the US president as a moron, following a meeting at the Pentagon on July 20th, Mr Trump told Forbes magazine that he believed the report was “fake news” but added: “If he did [say] that, I guess we’ll have to compare IQ tests. And I can tell you who is going to win.”

The White House press secretary, Sarah Huckabee Sanders, described the comments as a joke and said the president had full confidence in Mr Tillerson. “The president certainly never implied that the secretary of state was not incredibly intelligent . . . They had a great visit earlier today, and they are working hand in hand to move the president’s agenda forward,” she said, referring to a scheduled lunch meeting at the White House on Tuesday.

Mr Trump’s apparent slight on Mr Tillerson is the latest sign of tension between the president and the former ExxonMobil chief executive who is now his top diplomat. The secretary of state was forced to convene a press conference last week to clarify that he and the president had a good working relationship after reports of Mr Tillerson’s disparaging reference emerged. But signs of tensions between the two have persisted, with Mr Trump tweeting last week that Mr Tillerson was “wasting his time” negotiating with North Korea.

I told Rex Tillerson, our wonderful Secretary of State, that he is wasting his time trying to negotiate with Little Rocket Man...

The Failing @nytimes set Liddle' Bob Corker up by recording his conversation. Was made to sound a fool, and that's what I am dealing with!

Bob Corker gave us the Iran Deal, & that's about it. We need HealthCare, we need Tax Cuts/Reform, we need people that can get the job done!

Mr Trump also continued his feud with the senior Republican senator Bob Corker on Tuesday, tweeting: “The Failing @nytimes set Liddle’ Bob Corker up by recording his conversation. Was made to sound a fool, and that’s what I am dealing with!”

It follows comments over the weekend by the Tennessee senator, an early supporter of Mr Trump during the presidential campaign, in which he compared the White House to an “adult day care centre” and warned that Mr Trump’s behaviour was setting the nation “on the path to World War III”. “He concerns me,” Mr Corker told the New York Times. “He would have to concern anyone who cares about our nation. I know for a fact that every single day at the White House, it’s a situation of trying to contain him.”

Mr Trump’s public battle with Mr Corker risks alienating Republicans in Congress as he tries to get his agenda passed, including a package on tax reform that faces a key vote next week.

The president is also likely to ask Congress this week to reconsider sanctions on Iran should he choose to decertify the nuclear deal between Tehran and the US, UK, France, China, Russia and Germany, ahead of a key deadline this weekend.

Mr Corker, as head of the powerful foreign-relations committee, will play a key role in shaping how Congress responds to any move to unpack the Iran deal. Mr Trump criticised Mr Corker’s stance on Twitter. “Bob Corker gave us the Iran Deal, & that’s about it ” he said. “We need HealthCare, we need Tax Cuts/Reform, we need people that can get the job done!”