Podcast: ‘We live in an age when the fog of war is swirling over absolutely everything’ 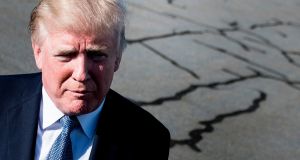 “The most common is the dubbing of extra gunfire on soundtracks, and correspondents having themselves rushing across the road as if they’re under fire.”

Fakery in news is not a new phenomenon, as Martin Bell can attest. For three decades Bell was known to us in our living rooms as the face of BBC war reporting, an authoritative voice from the frontlines of conflicts from Vietnam to Northern Ireland to the Balkans and many places in between.

His new book War and the Death of News brings together colourful stories and reflections from a formidable career in news journalism and his views on the state of war reporting today, “in an age in which the fog of war is swirling over absolutely everything”.

Also on the podcast, we look at US president Donald Trump’s expected move against the Iran nuclear deal. Washington Correspondent Suzanne Lynch explains how a deadline is forcing Trump to once again take a position at odds with the US’s international partners, and whether Iran will be prepared to negotiate.