House Republican leaders have pulled their bill to repeal the Affordable Care Act, also known as Obamacare, signaling a significant failure on what was supposed to be a major legislative accomplishment for President Donald Trump. Video: Reuters 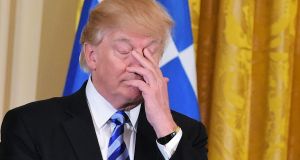 US president Donald Trump photographed in the White House on Friday. He suffered a major legislative reversal on Friday as Republicans were forced to pull their repeal of the Affordable Care Act from the House floor. Photograph: AFP/Getty Images

Donald Trump suffered a major legislative reversal on Friday as Republicans were forced to pull their repeal of the Affordable Care Act from the House floor.

After weeks of contentious negotiations over the American Health Care Act (AHCA), Republicans had to admit defeat as they could not gain sufficient support from their own side for the plan to overhaul US health insurance.

Speaking afterward in the Oval Office, Trump blamed Democrats for the failure of a bill to repeal the signature achievement of Barack Obama. “If [Democrats]got together with us, and got us a real healthcare bill, I’d be totally OK with that. The losers are Nancy Pelosi and Chuck Schumer, because they own Obamacare. They 100 per cent own it,” he said.

Trump refused to bash the House speaker, Paul Ryan, but declined to answer a question about policy changes he would like to see in health reform. Instead, he said he was ready to move on to tax reform, saying: “We’re probably going to start going very strongly on big tax cuts. Tax reform that will be next.”

Earlier on Friday, as it became clear that Republican resistance to the bill was hardening, Ryan went to the White House to tell Trump in person that he did not have the votes to pass the bill.

The White House press secretary, Sean Spicer, had insisted the vote would go ahead at 3.30pm .

“Has the team put everything out there, have we left everything on the field? Absolutely,” he told reporters at his daily briefing.

Here's what President Trump said when he personally called @costareports to say that the health-care bill was dead https://t.co/66Zml0IsI6

“But at the end of the day this isn’t a dictatorship and we’ve got to expect members to ultimately vote how they will according to what they think.”

However, Spicer’s imagined 3.30pm deadline slid by, ignored by Republicans on Capitol Hill, and the first reports emerged that Trump had asked for the vote to be pulled. Minutes later House Republicans, short of votes, had withdrawn the health bill.

At a press conference soon afterward, Ryan admitted: “Moving from an opposition party to a governing party comes with growing pains and, well, we’re feeling those growing pains today. I will not sugarcoat this: this is a disappointing day for us.”

He said “doing big things is hard” and conceded that after almost a decade of saying no to everything in opposition, the Republicans had failed to come together and agree on something they have opposed for seven years. “We are going to be living with Obamacare for the foreseeable future,” he said.

Ryan said he had recommended the bill be pulled when he realized the votes were lacking. But he praised Trump’s role in the negotiations, adding: “The president gave his all in this effort; he’s really been fantastic. Still, we’ve got to do better and we will.”

Asked how Republican members could now go back to their constituents having failed to keep their promise, Ryan replied: “That’s a really good question. I wish I had a better answer for you.”

Separately, a Washington Post reporter described a call with Trump in which he said the bill would not return any time soon.

Ryan also conceded that Republicans would now move on to other priorities - securing the border, rebuilding the military and tax reform. “Now we’re going on to move on with the rest of our agenda because we have big, ambitious plans to improve people’s lives in this country.”

Although speculation had grown on Friday afternoon that the bill would be pulled, the announcement came as a surprise to Republican members.

An emergency meeting of the House Republican Caucus was called shortly before the scheduled vote. As it was announced, the House went to recess, with Democrats shouting in a taunting manner, “Vote, vote, vote”, daring Republicans to bring the bill up. They did not.

In a short meeting, Ryan announced that the bill was being pulled from the floor in a terse statement to members.

Many moderates in swing districts were wary of supporting the legislation, which included major cuts to Medicaid and was estimated by the non-partisan Congressional Budget Office to lead to 24 million fewer Americans having health insurance over the next 10 years.

Conservatives also objected to the legislation for keeping too much of the architecture of the Affordable Care Act (ACA), frequently referred to as Obamacare. Although the Republican leadership made a major concession to them on Thursday by removing the federal mandate that health insurance plans cover “essential health benefits” such as maternity care and mental healthcare, this was not enough to win them over.