60 years after Treaty of Rome, the argument over a multi-speed Europe is just beginning 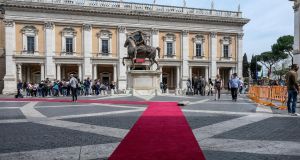 A red carpet is laid down during the final preparations for an informal European summit commemorationg the 60th anniversary of the Treaty of Rome, at Rome’s Piazza del Campidoglio, Capitoline Hill, on Friday. Photograph: Alessandro Di Meo/ANSA via AP

All but one of the European Union’s leaders will stand on Rome’s Capitoline Hill on Saturday and proclaim their commitment to Europe’s unity and their determination to make it stronger, more effective and more prosperous. But as they mark the 60th anniversary of the Treaty of Rome, the 27 leaders will acknowledge that the EU faces multiple crises both within and without.

“The European Union is facing unprecedented challenges, both global and domestic: regional conflicts, terrorism, growing migratory pressures, protectionism and social and economic inequalities. Together, we are determined to address the challenges of a rapidly changing world and to offer to our citizens both security and new opportunities,” they will say in a joint declaration.

The missing leader will, of course, be Theresa May – although European Commission president Jean-Claude Juncker insisted on Friday that the British prime minister will not be the elephant in the room because “she is not an elephant”. Still, the impending departure of the EU’s second biggest member state is a blow to the union’s confidence, halting its apparently inexorable expansion and progress.

The euro zone crisis has eased, but it has not gone away and a third bailout for Greece this summer could reopen the Europe’s north-south conflict over economic and monetary policy. Similarly, the number of migrants arriving in Europe has fallen dramatically since the EU agreed a dubious deal with Turkey’s Recep Tayyip Erdogan. But the central Mediterranean route, from Libya to Italy, has proven more difficult to block and the increasingly authoritarian Erdogan is an unreliable partner.

For the first time in its history, the EU faces an American president who is openly hostile to the European project, and has encouraged other states to follow Britain towards  exit

Geert Wilders’s failure to meet expectations has encouraged the hope that the rise of far-right, anti-EU parties in Europe may have halted. In an interview with the Financial Times last Saturday, Juncker warns against such optimism, quoting Brecht – “Der Schoss ist fruchtbar noch” (that womb is still fruitful).

The euro zone and migrant crises exposed the limits of solidarity in the EU, first when the richer economies imposed punitive austerity programmes on the bailout states and later when only a handful of member states were willing to share the burden of accepting migrants. In September 2015, member states agreed to relocate 120,000 asylum seekers from Italy and Greece; by last month, they had accepted less than one-tenth of that number.

At the Palazzo dei Conservatori, the leaders will see a 1,000-year-old bronze sculpture of the she-wolf who suckled Romulus and Remus, the founders of Rome. The EU has its own troublesome twins in the shape of Poland and Hungary, which flout democratic norms while resisting their responsibilities as member states.

Meanwhile, for the first time in its history, the EU faces an American president who is openly hostile to the European project, and has encouraged other countries to follow Britain towards the exit.

Despite these challenges, the EU has much to celebrate, above all its own resilience. The euro has thus far defied the doomsayers by remaining intact, and in Mario Draghi, it has a central banker with the right combination of flexibility and grit to survive another crisis. The great influx of migrants in 2015 put a massive strain on some member states and on the Schengen open borders system but the EU has come through that crisis, even if it has not overcome it.

Member states squabbled over the wording of the leaders’ joint declaration, particularly the prominence of a reference to a 'multi-speed Europe'

The EU’s claim to have secured peace in Europe sounds more relevant, after the continent saw the return of armed, inter-state conflict in Ukraine in 2014. And the fact that the EU is no longer surrounded by a “circle of friends” makes the case for greater security co-operation more persuasive. Donald Trump’s dismissive view of Nato further reinforces the argument for more autonomous European defence structures, as does Erdogan’s unpredictability.

The EU could, barring an upset, be invigorated by this year’s elections in France and Germany. Francois Hollande will be unlamented, particularly if he is succeeded by Emmanuel Macron, an enthusiastic European who wants to revive the Franco-German motor within the EU. Angela Merkel is widely viewed as the indispensible European leader but her Social Democrat challenger Martin Schulz could effect a useful shift in German policy, boosting domestic demand and showing greater flexibility on fiscal rules and the mutualisation of debt.

In advance of Saturday’s meeting, member states squabbled over the wording of the leaders’ joint declaration, particularly the prominence of a reference to a “multi-speed Europe”. The idea has been around for a quarter of a century and is already a realised in the euro zone and Schengen. But Germany and France wanted to go further, by explicitly identifying it as a preferred means of integration.

Other countries, including Ireland, argued that unity must take precedence and that any enhanced co-operation must operate within existing treaties.

“We will act together, at different paces and intensity where necessary, while moving in the same direction, as we have done in the past, in line with the treaties and keeping the door open to those who want to join later. Our union is undivided and indivisible,” the leaders will say.

The argument over a multi-speed Europe is just beginning, and a more flexible approach could see the EU embrace disintegration as well as integration, with some member states moving into slower streams in some policy areas, while others opt in to faster ones. As Ireland braces for Brexit, such changes will raise new questions about the country’s preferred place within the EU.