The leaders of 27 European Union countries have posed for a family photograph after attending a ceremony that marks the 60th anniversary of The Treaty of Rome. Video: Reuters 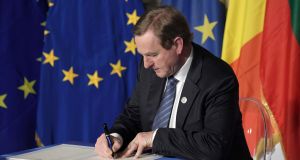 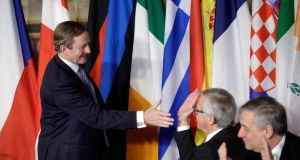 European Union leaders came to Rome to proclaim their unity at the place the European project began 60 years ago but a sharp disagreement about the union’s future was clear from the start. The leaders signed a declaration which enshrines the concept of a multi-speed Europe, with groups of countries moving towards further integration at their own pace.

But in his speech during the ceremony, European Council president Donald Tusk criticised the idea, declaring that the EU would not survive unless it remained united. “Today in Rome we are renewing the unique alliance of free nations that was initiated 60 years ago by our great predecessors. At that time they did not discuss multiple speeds, they did not devise exits, but despite all the tragic circumstances of the recent history, they placed all their faith in the unity of Europe,” he said.

The declaration says that EU member-states “will act together, at different paces and intensity where necessary, while moving in the same direction”. However, speaking in the Horatii and Curiatii hall of the Palazzo dei Conservatori, where the six founding members signed the treaty of Rome in 1957, Mr Tusk asked why today’s leaders should abandon the confident vision of their predecessors.

In an apparent swipe at his native Poland and at Hungary, which have faced criticism for violating democratic norms and interfering with the independence of the judiciary and press freedom, Mr Tusk said European unity was less about bureaucracy than about values.

“Today it is not enough to call for unity and to protest against multiple speeds. It is much more important that we all respect our common rules such as human rights and civil liberties, freedom of speech and freedom of assembly, checks and balances, and the rule of law. This is the true foundation of our unity,” he said.

The leaders arrived at the Michelangelo-designed square overlooking the Forum Romanum, to be greeted on a red carpet by ushers wearing scarlet, gold-braided tailcoats and yellow knee breeches. Inside the hall, speeches were interspersed with musical interludes and a newsreel report of the 1957 signing ceremony.

Then, one by one, the 27 leaders signed the Declaration of Rome.

Britain’s prime minister Theresa May, who will next Wednesday trigger article 50 of the Lisbon Treaty to leave the EU, stayed away.

“I found the signing ceremony here to be in many ways realistic about what we wanted to set out to do here, to reflect on the past, to consider where we are and to look at the future,” Taoiseach Enda Kenny said afterwards. “And in that sense, I’m glad that the wording of the Declaration of Rome includes the language about listening to people, about working with national governments and about striving for peace and prosperity, and opportunity in the time ahead.”

Mr Kenny said that, when the EU responds to Ms May’s notification of Brexit next week with draft guidelines for the negotiations, he wants them to refer to Ireland’s key issues of the Good Friday Agreement, the Border and the Common Travel Area.

“I would like the language to reflect the fact that Ireland has a unique and particular set of circumstances and I would like those circumstances referred to in the wording that comes through. This is a draft document which will have, probably, insertions from different countries. But in our case, we have a unique set of circumstances, they are very particular and specific to Ireland and I want that reflected in the language setting out the negotiations,” he said.

The Rome ceremony was the first milestone event for more than 40 years that the EU has marked without Britain and the departing member-state was scarcely mentioned. As the shock of Brexit subsides, the remaining member-states are looking towards the EU’s future, mostly united in the goal of strengthening it, even if they disagree about how to achieve it.