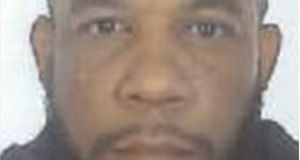 The final hours and violent past of the ex-convict who launched the terror attack in Westminster in which he and four others were killed has begun to emerge.

The Metropolitan police released a photo of Khalid Masood on Friday afternoon, as the acting deputy commissioner, Mark Rowley, said officers were keen to establish whether he had acted “totally alone inspired by terrorist propaganda” or whether he had support.

Details of Masood’s complex past, which included criminal convictions, a nomadic lifestyle and the use of at least three names, emerged on Friday, along with eyewitness accounts of his final hours.

Masood (52) was “laughing and joking” in Brighton the night before making his fatal journey to London, according to the manager of a hotel in Brighton where he stayed on Tuesday.

“We never thought anything of him. He was just another guest who checked into the hotel,” Sabeur Toumi, of the Preston Park hotel, told Sky News.

Masood discussed his family, saying his father was ill and mentioning his “wonderful children”. “He was very friendly, laughing and joking,” Mr Toumi said.

The room where Masood stayed was swabbed for DNA evidence by the police as detectives worked to piece together his movements in the days before the attack.

He was also found to have checked WhatsApp moments before ploughing into pedestrians on Westminster Bridge.

The police made two more “significant” arrests overnight and a third on Friday morning, taking the number of people in custody to 10.

And they announced the name of a fourth person killed by the attack: Leslie Rhodes (75), of south London, died in hospital overnight from his injuries sustained on Westminster Bridge on Wednesday.

Detectives were still searching two addresses in Birmingham and one in east London on Friday afternoon.

Three cars were seized in an armed raid linked to the investigation, Press Association reported.

Masood, known in 2000 as Adrian Elms, was jailed for two years for the attack.

Lawyers involved in the case said he and his family were forced to move from their home in Northiam, Sussex, after being “ostracised” because of the attack.

The court heard that Elms was one of only two black men living in the village, near Rye, at the time of the attack which left his victim, Piers Mott, with an 8cm gash to his face.

Adrian Baker (51), who has lived in Northiam for 25 years, told the Press Association on Friday that Elms was known as a “troubled” character.

He said: “I’m gobsmacked. He didn’t appear to be very religious. He would go into the local pubs.

“I do remember a fracas involving a guy called Piers Mott. This was a long time ago. I remember Elms being a bit of a troubled character.”

Masood was born Adrian Russell Ajao and the Guardian has established he grew up in Tunbridge Wells with two half-brothers. He changed his name when his mother married.

A classmate from Huntleys secondary school said he was “really, really shocked” to hear of Masood’s attack.

Stuart Knight, who runs a butchery in Tunbridge Wells, said: “He was a smashing guy, really nice chap . . . He was a bright student. He loved sport. He was in the rugby team.”

“He was very well-liked, he had a lot of friends. He was one of only two black people out of 600 children . . . I don’t know if he had girlfriends but he did party very well, he liked to have a good time.”

Eight people had been arrested earlier, but one woman has since been released on bail.

“Our investigation focuses on [Masood’s] motivation, his preparation and his associates,” said Mr Rowley, who is head of the Met’s counter-terrorism command.

“While there’s still no evidence of further threats, you’ll understand our determination is to whether he acted totally alone inspired by terrorist propaganda or if others have encouraged supported or directed him.”

Mr Rowley gave details on the breadth of the investigation, which has been named Operation Classific: searches were continuing at five addresses, with 16 property searches having been completed and 2,700 items seized.

Police had had contacts with about 3,500 witnesses, including 1,000 from Westminster Bridge and 2,500 who were on the parliamentary estate during Wednesday’s attack.

The retired window cleaner lived alone and was described by his neighbour Philip Williams as “the nicest man you ever met”.

The others killed in the attack were PC Keith Palmer (48), who was fatally stabbed by Masood inside the parliamentary gates; Kurt Cochran (54), an American tourist, and Aysha Frade (43), a London teacher.

Mr Rowley said at least 50 people, of 12 nationalities, had been injured in the attack, with 31 requiring hospital treatment.

“It’s a poignant reminder that the impact of the attack on the capital will reach around the world,” he said.

Dramatic footage emerged on Friday of Theresa May running towards a car, surrounded by her security detail, as she left parliament in the aftermath of the attack.

The prime minister told MPs on Thursday that Masood had been previously known to MI5 in relation to concerns about violent extremism, although he was a peripheral figure and had fallen from the intelligence picture.

Scotland Yard also revealed that, apart from the 2000 assault, Masood had a string of criminal convictions, including grievous bodily harm and other assaults, possession of offensive weapons, and public order offences.

His first conviction was in November 1983 for criminal damage and his last was in 2003, when he was living in Eastbourne, for stabbing a man in the nose during an altercation outside a rest home.

According to local newspaper reports at the time he was charged with GBH wounding with intent.

He also faced two charges of possessing an offensive weapon, said to be a knife and a baton.

In September 2004, he married Farzana Malik in Medway, Kent.

Other reports claimed to detail his professional career, saying that Masood recorded on his CV that he had taught English in Saudi Arabia in 2005 and returned to the UK in 2009 when he became a “senior English teacher” at a TEFL college in Luton.

In 2012, he reportedly set up an English language tutoring business, named IQRA, based in Birmingham.

“We’re keen to hear from anyone who knew Khalid Masood well,” he said.

“Anyone who understands who his associates were, anyone who can provide information about the places he’s recently visited. There might well be people out there who did have concerns about Masood but weren’t sure about passing that information to us.”

This is being done by extending shifts from eight to 12 hours, cancelling rest days and stopping annual leave.

In the rest of the UK the number of armed officers deployed is up by one-third.

The boosted police presence is expected to last until the weekend at least, in an attempt to provide maximum deterrence to anyone plotting a follow-up attack, or hate crimes against Muslim people.