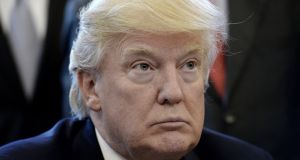 US president Donald Trump: lost in his own echo-chambers of fallacy. Photograph: Olivier Douliery-Pool/Getty Images

This week has Donald Trump gone too far? Has the man who prides himself on running with his own script finally overreached himself?

It’s a high bar given the president’s previous actions, but there is a growing sense in Washington that Trump’s relationship with the truth is becoming a problem for the US president.

On Monday, FBI director James Comey took the stand before the House intelligence committee as part of its ongoing investigation into Russian interference in the 2016 presidential election. Comey went further than many had expected. In addition to confirming that an investigation was under way, he told the committee that a probe into Trump associates and Russia had been ongoing since July.

Most significantly, he dismissed Trump’s allegations that former president Barack Obama wiretapped Trump Tower. The director of the FBI directly contradicting a sitting US president is itself unprecedented, but Trump’s live tweeting during the hearing was equally alarming.

While the testimony was under way, the official US presidential account issued a tweet: “The NSA and FBI tell Congress that Russia did not influence electoral process.” In fact, they didn’t, as Comey confirmed when questioned about the president’s tweet an hour later. The bizarre spectacle of a president providing live commentary on an ongoing congressional hearing which then itself becomes part of the hearing is the kind of meta-theatre that has become a hallmark of the Trump presidency.

Even before Monday’s testimony, Trump’s unfounded allegations about Obama were beginning to cause deep unease within the Republican party, with senior Republicans deserting him on the issue.

House speaker Paul Ryan said last week there was “no evidence” the wiretapping had taken place. When asked if he believed Obama had wiretapped Trump Tower, vice president Mike Pence stopped short of backing the president. “What I can say is that the president and our administration are very confident that the congressional committees in the House and Senate that are examining issues surrounding the last election, the run-up to the last election, will do that in a thorough and equitable way,” he replied, side-stepping the question.

The idea of a delusional president clinging to untruths in the face of direct contradiction has prompted some scorching criticism in US media this week.

On Wednesday, the Wall Street Journal, the Rupert Murdoch-owned publication that has been struggling to shake off a reputation for being too pro-Trump, published a damning editorial claiming the president’s falsehoods were eroding public trust at home and abroad.

“If President Trump announces that North Korea launched a missile that landed within 100 miles of Hawaii, would most Americans believe him? Would the rest of the world? We’re not sure, which speaks to the damage that Mr Trump is doing to his presidency with his seemingly endless stream of exaggerations, evidence-free accusations, implausible denials and other falsehoods,” it said.

The imagined scenario of a president announcing a major security threat when everyone has stopped listening captured the growing sense of anxiety about the credibility and authority of a figurehead who remains the world’s most powerful man.

The image of a president whirling around in his own delusion, detached from reality, has taken hold as Trump continues to fly in the face of facts, lost in his own echo-chambers of fallacy.

On Thursday Trump’s relationship with the truth again came under scrutiny in a sprawling interview with Time magazine in which he continued to propagate claims that have been repeatedly exposed as false.

He brought up his controversial comments on Sweden at a rally in Florida last month, compounding it with further untruths. “Sweden. I make the statement, everyone goes crazy. The next day they have a massive riot, and death, and problems.”

He failed to quash his assertion that three million illegal immigrants voted in the election.

He refused to row back from his Obama allegations, again arguing that he had put the phrase “wire tapping” in quotations, and reiterating that he based the claim on the views of “highly respected people” such as Judge Napolitano, the Fox news commentator who claimed that Obama ordered the wiretapping of Trump but who has since been taken off air.

As he wandered from topic to topic, the president’s obsession with the media surfaced repeatedly. At one point he told his interviewer: “I have a good story for you”; he also urged him to read a story just published online by Politico and accused the New York Times of altering a headline.

As he enters the 10th week of his presidency, Trump’s insistence on peddling an alternative reality shows no sign of abating, as he persists – as the Wall Street Journal puts it – to cling to false claims “like a drunk to an empty gin bottle”.