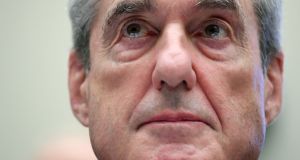 Senior Democrats talked down the possibility of impeachment yesterday, as the fallout from Robert Mueller’s appearance before Congress continued.

Speaking after the former special counsel testified for six hours on Capitol Hill on Wednesday, House speaker Nancy Pelosi said that his appearance before Congress had crossed “a threshold in terms of the public awareness of what happened.” But she stopped short of advocating impeachment.

“My position has always been, whatever decision we made in that regard would have to be with our strongest possible hand, and we still have some matters outstanding in the courts,” Ms Pelosi said.

“Watergate was when [we] got the information in the tapes that broke the case,” adding: “If we go down that path, we go in the strongest possible way.”

Democrats remain deeply divided about whether to move forward with impeachment articles against Donald Trump. Mr Mueller’s testimony on Wednesday – which was for the most part dry and characterised by a halting performance– was widely seen as insufficient to change the mood of either the public or members of the Democratic party on whether to begin impeachment proceedings against Mr Trump.

Figures released on Thursday revealed that just over 13 million people tuned in to the live testimony on Wednesday which was covered by most of the major news networks. This compares to viewerships of about 20 million for former FBI director James Comey’s explosive testimony two years ago and last year’s Brett Kavanaugh hearings which saw the Supreme Court nominee and the woman who accused him of assault testify publicly.

Among those who favour impeachment are Jerry Nadler, the powerful head of the House judiciary committee.

Congresswoman Sheila Jackson Lee, also a member of the committee, was among those advocating impeachment on Thursday.

“I’m not afraid of impeachment,” she said. “People are asking how long are we going to have this kind of behaviour in the White House. ”

While Democrats remained at odds over their strategy, the US president’s supporters interpreted the six-hour testimony – which included no bombshell headlines, but underlined that Mr Mueller did not exonerate the president – as an unqualified victory for Mr Trump.

Mr Trump, who described the hearings as a “disaster” for Democrats, on Thursday retweeted comments by a Fox News contributor which stated that “Yesterday changed everything, it really did clear the President. He wins.”

As the US Congress prepared to finish up the current session for the summer recess, the House of Representatives on Thursday backed a two-year budget deal that will raise spending by $320 billion.  The massive funding package, which is expected to be endorsed by the Senate, means that the United States will not default on its debts in the autumn, but its multibillion dollar price-tag caused consternation among many Republicans.

Tweeting ahead of the vote, Mr Trump urged Republicans to back the deal, which was negotiated by Ms Pelosi and Treasury Secretary Steve Mnuchin in recent weeks. “House Republicans should support the TWO YEAR BUDGET AGREEMENT which greatly helps our Military and our Vets. I am totally with you!,” he wrote, referencing the increase in money for the military contained within the package.

But in a sign of the opposition within Mr Trump’s own party, more than 130 Republicans voted against it.

The two-year package will allow the government to keep borrowing, but threatens to deepen the budget deficit which is already approaching $1 trillion.  The national debt stands at approximately $22 trillion. However, unemployment is at a historic low and earlier this month the US recorded its longest economic expansion on record after it entered its 11th year of successive economic growth.