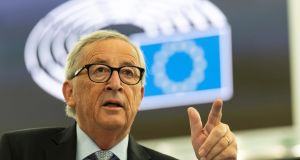 British opposition MEPs strongly appealed to the European Parliament and Council on Wednesday to “give us time” by granting another Brexit extension. And MEPs endorsed a resolution which, as European People’s Party (EPP) leader Manfred Weber put it, would see the parliament backing a further extension only if it had a specific purpose such as an election or a referendum.

The likelihood of such a request remains far from clear.

Naomi Long of Alliance, Robin Corbett and Seb Dance of UK Labour, Molly Scott Cato and Ellie Chowns of the Greens, and Alyn Smith of the Scottish Nationalists all echoed the urgent appeal for an extension during the parliament’s debate on Brexit in Strasbourg on Wednesday morning.

President of the Commission Jean-Claude Juncker, reflecting on his meeting on Monday with British prime minister Boris Johnson in Luxembourg, cast doubt on the possibility of the EU striking a Brexit deal with the UK. He warned that time is tight and that Mr Johnson has yet to spell out his demands on the backstop.

He said he was “not sure we will get there”.

MEPs in the newly-elected parliament passed a resolution reaffirming the prioritisation of avoiding a hard border in Ireland and the preservation of the Belfast Agreement.

It warns that MEPs will not back an agreement which drops the safeguards of the backstop or a rewritten political declaration on the future relationship in which the UK repudiates commitments to maintaining regulatory alignment while insisting on a free trade agreement. The backstop is a mechanism in the withdrawal agreement that would guarantee that the Border between Northern Ireland and the Republic remains open after Brexit.

Michel Barnier, the union’s chief negotiator, who was also present in Luxembourg, warned pointedly that “we must not give the appearance of negotiating”.

He said it is up to the UK to make internal arrangement to give the Northern Ireland institutions a say.

And he warned that attempts by the UK to pull back on regulatory alignment commitments in the political declaration would make agreement more difficult.

On behalf of the Renew group, Guy Verhofstadt said that the UK is proposing free trade without standards. “That will not happen . . . We will not kill our own companies . . . We will never accept a Singapore in the North Sea.”

Danuta Hubner (EPP), also a member of the parliament’s Brexit Steering Group, said that they still hope for a relationship based on regulatory convergence and a level playing field

Nigel Farage (Brexit Party) said a deal based on a treaty without a backstop “is still a very bad deal”, forcing the UK into permanent membership of the customs union. It would put “us entirely at your mercy . . . we want no part of your European empire.”

Manfred Weber, leader of the centrist EPP, deplored the approach of Brexiteers as “stupid”. “Brexiteers claimed that Westminster must take back control. Now they shut it down,” he said. His party colleague Esteban Gonzales Pons said that “British democracy is a shadow”. The silencing of the Commons meant, he said, that “This [the European Parliament] is today the British house of democracy.”

Ming Flanagan (Ind/GueNGL) warned of the threat to Ireland’s beef trade in the event of a no-deal. “EU solidarity will be tested,” he said as Ireland would need new markets. He called on the union to reject the Mercosur trade deal which would see 99,000 tonnes of beef imported annually into the EU.

Diane Dodds (DUP) said that the party preferred an orderly Brexit but reiterated its opposition to the backstop. “The withdrawal agreement must not damage the constitutional integrity of Northern Ireland’s place in the UK,” she said, insisting that it breached the “parity of esteem” principles enshrined in the Belfast Agreement. Any solution has to include the unionist people, she said.

Billy Kelleher (FF/Renew) argued that there is an obligation on the UK to accept that a great democratic process took place in 1998 in the Belfast Agreement which the UK has an obligation to respect as much as the referendum to leave the EU.

Clare Daly (Ind/Gue/NGL) said that Brexit was essentially about the failure of neoliberal politics in the EU and Britain. She said that the only way forward was to “abandon the road the union is on, and abandon neoliberalism”.

Sean Kelly (FG/EPP) said that Brexit would be seen by history as “the incredible sulk by the incredible hulk” and warned that tension and suspicions still remain in the North.

Ciarán Cuffe (Greens) quoted Séamus Heaney’s injunction that we must “believe in miracles”. “We must not lose hope that a deal can be done,” he said.