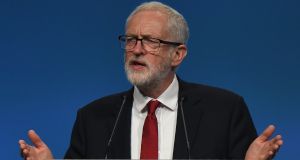 Labour leader Jeremy Corbyn is expected to come under increased pressure to explicitly back staying in the EU. Photograph: Ben Stansall/AFP/Getty Images

British Labour leader Jeremy Corbyn has insisted his party would put a “sensible” Leave option to voters in a new Brexit referendum and abide by the result.

The comments come ahead of Labour’s annual conference, where Mr Corbyn is expected to come under increased pressure to explicitly back staying in the EU.

The Labour leader said that the party would negotiate a new Leave agreement with the EU if it wins the next general election and then put that to the popular vote along with a Remain option.

Writing in The Guardian, Mr Corbyn said: “A Labour government would secure a sensible deal based on the terms we have long advocated, including a new customs union with the EU; a close single market relationship; and guarantees of workers’ rights and environmental protections.

“We would then put that to a public vote against remain, and I pledge to carry out whatever the people decide, as a Labour prime minister.

“We are the only UK-wide party ready to put our trust in the people of Britain to make the decision.

“(Boris) Johnson wants to crash out with no deal. That is something opposed by business, industry, the trade unions and most of the public — and even by the Vote Leave campaign’s co-convener, Michael Gove, who said earlier this year: ‘We didn’t vote to leave without a deal.‘

“And now the Liberal Democrats want MPs to overturn the referendum result by revoking article 50 in a parliamentary stitch-up.

“It is simply undemocratic to override the decision of a majority of the voters without going back to the people.”

The comments appeared to signal that Mr Corbyn could adopt a neutral position in any future referendum if he became prime minister.

A number of senior shadow cabinet figures, such as Emily Thornberry and John McDonnell, have said they would back Remain in a new referendum.

Labour’s deputy leader Tom Watson has gone further by calling for another national poll on Brexit before any general election is held.

“They had the chance to let the public decide how to resolve Brexit via a general election — but Jeremy Corbyn doesn’t trust the people.”