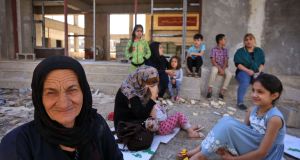 About 100,000 Kurds have fled the Kirkuk region for fear of persecution since Iraqi armed forces retook disputed territory after a Kurdish independence vote rejected by Baghdad, Kurdish officials said on Thursday.

The United Nations voiced concern at reports that civilians, mainly Kurds, were being driven out of parts of northern Iraq retaken by Iraqi forces and their houses and businesses looted and destroyed, and urged Baghdad to stop any such abuses.

In the first incident of deadly violence, a Kurdish man was killed and six wounded by Iraqi security forces while protesting at the army’s takeover of their town, Khanaqin, by Iraqi forces, local mayor Mohammed Mulla Hassan said.

Kurdish troops had left Khanaqin, near the border with Iran, on Tuesday to avoid clashing with advancing Iraqi forces.

Central government forces swept into Kirkuk, a multi-ethnic city of more than a million people and the hub of a major oil-producing area, largely unopposed on Monday after most Kurdish peshmerga forces withdrew rather than fight.

Iraqi forces also took back control of Kirkuk oilfields, effectively halving the amount of output under the direct control of the semi-autonomous Kurdistan Regional Government (KRG) in a serious blow to the Kurds’ independence quest.

Nawzad Hadi, governor of Irbil, the KRG capital, told reporters that about 18,000 families from Kirkuk and the town of Tuz Khurmato to the southeast had taken refuge in Irbil and Sulaimaniya, inside KRG territory. A Hadi aide said the total number of displaced people was about 100,000.

UN relief officials said they had received allegations that 150 houses had been burned and 11 blown up in Tuz Khurmato and offices of Turkmen political parties in Kirkuk assaulted.

The UN Assistance Mission for Iraq issued a statement urging the Baghdad government “to take every action to halt any violations and ensure all civilians are protected and that the perpetrators of acts of violence, intimidation and forced displacement of civilians be brought to justice”.

Iraqi prime minister Haider al-Abadi said on Wednesday that security was being maintained in Kirkuk by local police backed by the elite Counter Terrorism Service, trained and equipped by the United States mainly to fight Islamic State militants. “All other armed groups should not be allowed to stay,” Mr Abadi said.

Iran and Turkey joined the Baghdad government in condemning the Iraqi Kurds’ September 25th referendum, worried it could worsen regional instability and conflict by spurring their own Kurdish populations to push for homelands. The Kurds’ long-time big power ally, the United States, also opposed the vote.

With the referendum having given Mr Abadi a political opening to regain disputed territory and tilt the balance of power in his favour, the KRG cabinet on Thursday welcomed his call for talks to resolve the crisis.

Mr Abadi had said on Tuesday he considered the referendum “a thing of the past”, and asked that the KRG cancel the outcome of the vote as a precondition for negotiations to begin.

In a statement, the KRG cabinet said, “It will not be possible to resolve the issues through military operations”.

It added: “[We have] asked the international community to help both sides start a dialogue to solve the outstanding issues based on the Iraqi constitution.”

KRG peshmerga forces deployed into Kirkuk in 2014 when Iraqi government forces fell apart in the face of a lightning offensive by Islamic State insurgents, preventing the oilfields from falling into jihadist hands.

Iraqi armed forces also took control of Kurdish-held areas of Nineveh province north of Kirkuk, including the Mosul hydro-electric dam, after the peshmerga pulled back.

Crude oil flows through the KRG pipeline to the Turkish port of Ceyhan have been disrupted by a gap between incoming and outgoing personnel since Baghdad’s retaking of Kirkuk.

An Iraqi oil ministry official in Baghdad said on Thursday that Iraq would not be able to restore Kirkuk’s oil output to levels before Sunday because of missing equipment at two fields.

The official accused the Kurdish authorities previously in control of Kirkuk of removing equipment at the Bai Hasan and Avana oil fields, northwest of the city.

Kurds have sought independence since at least the end of the first World War, when colonial powers carved up the Middle East after the multiethnic Ottoman Empire sundered, leaving Kurdish-inhabited land split between Turkey, Iran, Iraq and Syria.